My mate and occasional guest blogger on here Mike has another rant to get off his chest, it's the old familiar topic of pricing at Games Workshop, however a couple of recent releases have really made the scale of the issue come to the fore, over to Mike.......

Being an old Undead/ Tomb King’s gamer I always fancied having a Nagash model, but somehow I never got round to buying one one. The old metal model was not a priority buy back in the day and they are quite hard to find now, even on ebay. Games Workshop have recently brought out a New Nagash, and it is you would expect quite a spectacular model. Actually its little too spectacular for my taste if the truth be told (I disagree I think it's fantastic - Keith). It might even look a bit out of place next to my old skeletons, and I’d be frightened of knocking it over (really, if you knew me)(There is no clumsier human being - Keith). No seriously, it does look really nice and I wouldn’t mind one for my shelf. The really bad news is its £65. Sorry Games workshop I’m just not going to pay that for a Nagash. As I understand it that’s £65 for just the model too, no add ons, extras or freebies. The rules for Nagash appear in a separate book and you have to pay a lot of extra money. Interest over. 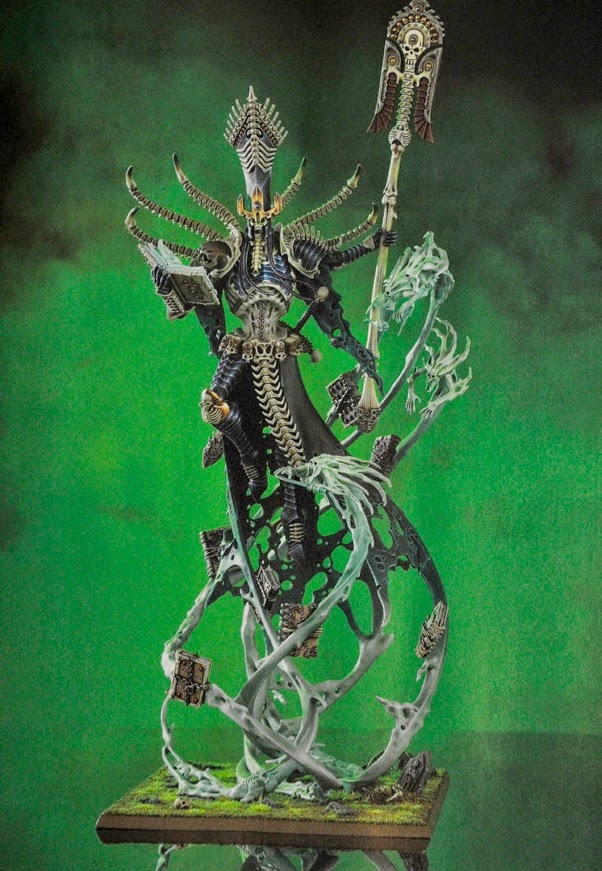 This is admittedly an Awesome model

Fortunately I was alerted to a new Kickstarter project by Mantic a couple of weeks ago and it cheered me up a lot. The quality of Mantics previous Kickstarters and the sheer amount of money being pledged to this one alerted me that it might be something to really look forward to. This Dungeon Saga game seems to be something like Warhammer Quest, where the player battles their way through various rooms and challenges meeting various cool baddies on the way. You know the script. We don’t know for sure of course because the game is still in production, but when I saw what comes in the box I went for it immediately. It turns out that for a pledge of $100 (that’s £4 less than Nagash) I will be getting an entire gaming system, packed with new models. Mantic have also Thrown in art prints, bonus scenarios, digital adventure books and all of the Dwarf King’s Hold scenarios for people like me who didn’t get around to buying those games first time around. That’s worth waiting 12 months for in my opinion. The Mantic crew who usually seem to have their finger on the pulse, have even included a mystery ‘undead demonlord’ model. Good move Mantic, I haven’t thought about Nagash since.

How much stuff?
I have to admit I made the same decision and I am eagerly awaiting the chance to play Dungeon Saga.  The 12 month delay is a slight issue, but once you get started on kickstarter being the way to get new games you have a steady supply of big boxes coming, before this arrives I'm expecting Deadzone wave 2, Mars Attacks, Deadzone wave 3, and Dreadball extreme.  And despite a few missing bits (that always get replaced eventually) getting the big box of kickstarter goodness is always a joy.  This is Mikes first kickstarter and I hope he has a good experience and helps fund more products that I also want to buy!