Happy Birthday To Me....

It was my birthday yesterday, I turned 29, which is OK, but scarily close to the big 3 0, but at least I was lucky enough to get given a few hobby related preasents. 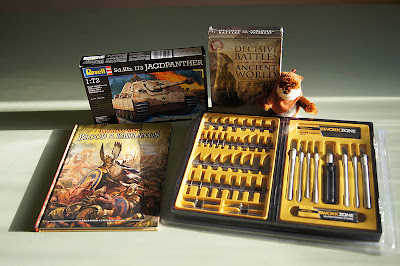 The highlight of the bunch is the new Warhammer campaign book 'Blood in the Badlands', A full colour hardback book containing a campaign (unsuprisingly set in the badlands), but also containing updated seige and underground fighting rules.  On a brief inspection it all looks rather good, a full review will follow in time.  Also a nice Revell 1:72 German Jagdpanther, I've been building it this morning and am rather chuffed with it actually, I think I'm goign to paint it in the colour scheme of the one I saw at the Imperial War Museum. I also got an always useful set of hobby knives and a DVD boxed set on decisive battles of the ancient world.  And finally whilst not truly hobby I also got a Ewok that talks when you press its stomach, and even being nearly 30 I still reckon thats massively cool.

So thanks to those that know me well enough to buy me all this cool geeky stuff.