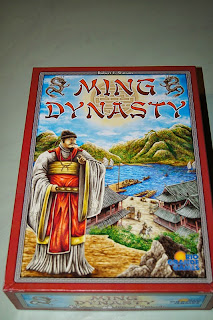 I managed to get a couple of games in of this, my new boardgame, at the weekend, so of course am sharing my thoughts on it, I picked this up in the works for £7.99 and my local store at least still had a few copies left yesterday.﻿

Ok lets start with the contents, no problems here, its all very good, the board is nice and thick and nicely illustrated on both the front and the back, the cards are fine and tokens are also nice and thick.  The playing pieces are coloured wood and are pretty standard and so are also fine.  The game also came with a bunch of little resealable baggies to keep all the bits in, always a nice touch.  Quality wise you won't be jumping off the ceiling about this, but I honestly can't see any problems with any of it either, except......

The way they have chosen to present the rules.  They're oddly split between a summary sheet and an explanation sheet, this is the weak point of the game, the rules are VERY badly written and it took several read throughs to try and understand how it was supposed to work, in the end we just started playing and just about had a grasp of it by the end of the first game. 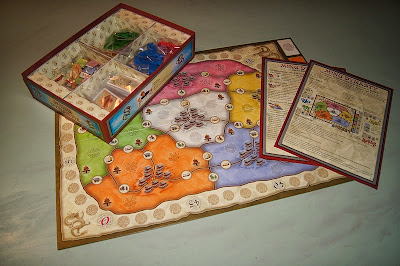 The gameplay its self is actually quite interesting the aim is to get family members into cities to gain points and province tokens, the quicker you can get a set of 6 province tokens the more points you get.  You can't move your family members though, they can only be deployed if your prince (who can move around) ends in a area and then they can be deployed there.  It's a lot more complicated than that though, your family members need to outnumber the enemy family members to get maximum points, also your prince can only move if he has the right card to go over a border, and he can only pick movement cards from areas that have family members in waiting.  There are a lot of decisions to make in this game, possibly too many.  It plays with 2-4 players, but as usual with these sorts of games I think its more interesting the more poeple you have.  The game only plays for 6 turns, which is nice as it doesn't go on for ever, also you only score points at the end of turns 2,4 and 6, this actually works out nicely and adds an interesting dynamic to the game. 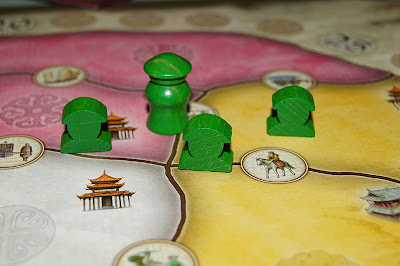 Some of the Green Playing Pieces

Well it's actually not a bad games once you get past the badly written rules (If you can't be bothered with this then this won't be the game for you) , there are a lot of decisions to make, which of course leads to increased replayability, and it's really quite strategic.  Also its not a long game, as you only ever get 6 turns and I think you'd struggle to make it last more than an hour and a half (our games took about an hour).  I'm not sure how much it was origanally, but I got this for £7.99, and at this price I'm pretty pleased with it.  If a mate has this and has already worked out the rules there are a lot worse ways to spend an hour.
Posted by brownk29 at 17:24:00