Something different today for my blog, a bit of an experiment if you will.  One of my long-time gaming partners asked if he could write a post on my blog explaining his current frustrations with Games Workshop.  I agreed to let him have a go, I got a lot more than expected, this is part one of a three part discussion/rant that I'll be posting over the next few days, over to Mike......
Sometime in late 1997 I walked into Games workshop and purchased my first Warhammer fantasy model. It was a £5 Undead Skeleton Chariot; an average model but I was chuffed with it. Collecting GW minis seemed fun and affordable to me and I was soon able to get enough models to play a fantasy game at the minimum recommended 1000pts level. Several more armies and regular gaming followed. We lost our gaming area for a while (When I went off to uni as I was the only one with a big table - Keith), and it wasn’t until somewhere in the mid/late 2000’s (6th and 7th ed. by then) that the old minis were brought out again. At that stage I realised that I no longer seemed to have enough, or the correct models to play larger games in the new editions. Despite having a job, I was also reluctant to purchase the models I needed to play those battles.


What had changed? One reason was the cost of minis (more on that later), but first a more general observation. 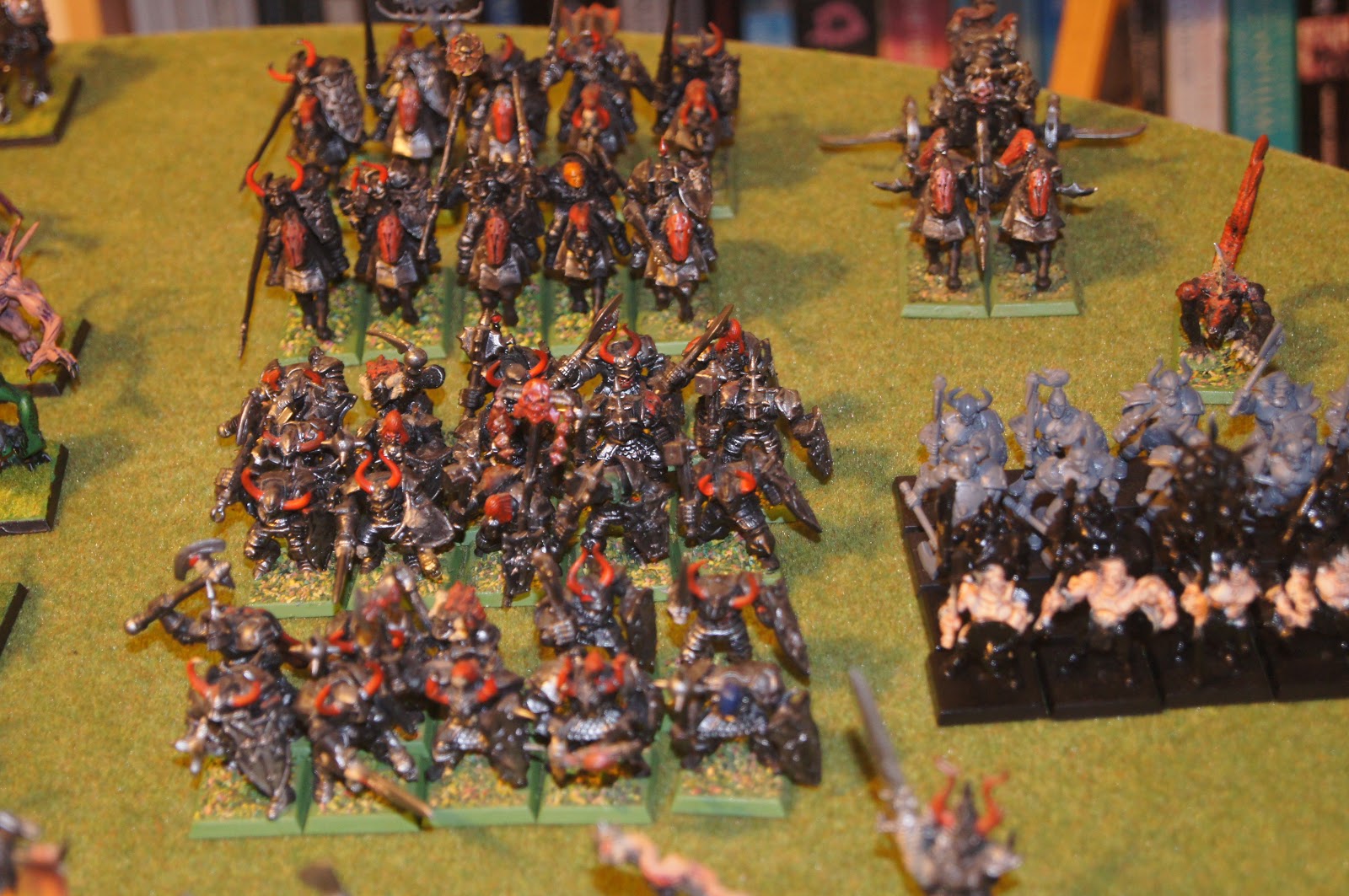 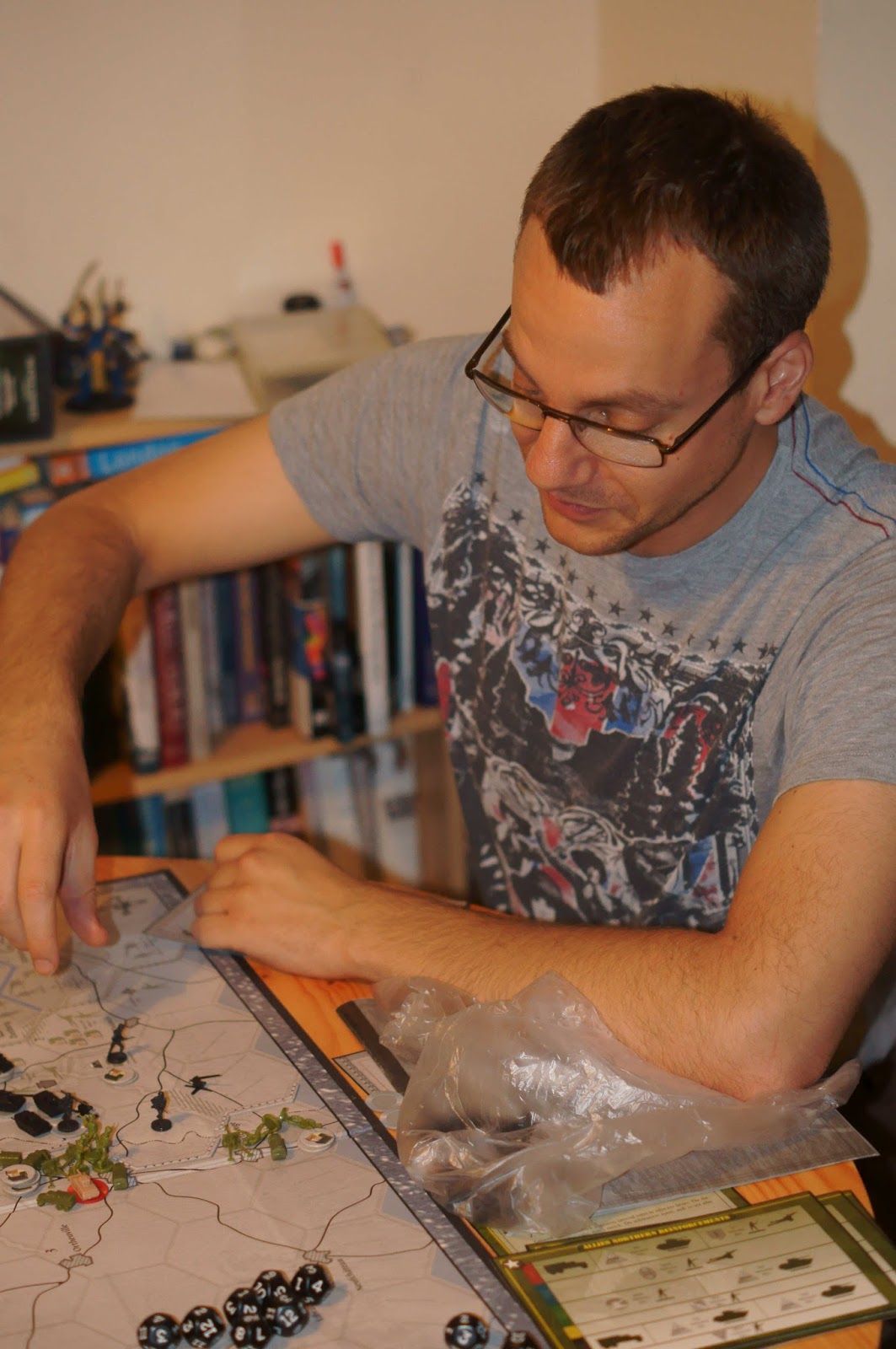 Mike concentrating on a game of Axis & Allies
People in our gaming group have commented that we have generally needed more models to play the same points limited tournaments which we had organised in previous years. Clearly, any collector would need quite a few more models for the above 1000pt Chaos list in 7th ed., than they would have in 5th. Now, I only have a handful of armies, and I don’t have an exhaustive collection of current and past codices to browse through. I’d be interested to see if this thesis holds up for other selections (perhaps Chaos is a poor example?). I’d be equally interested to see how other armies have changed over the years, right up to the current edition in 2014.
I don’t think many enthusiasts want to go back to the old rules of 5th edition. However I have to say that as a teenager it was essential to my staying in the hobby that I could acquire armies relatively quickly at a ‘minimum’ 1000pts level within 2-3 months. Moreover I could do this using money from my paper round. I wonder how many young potential gamers can do that today? And I haven’t even begun to discuss a more pressing issue – the ever increasing cost of the miniatures…. Part 2 to follow.
Mike does have a point about decreasing points costs for minis, I remember back when I started 40K a space marine tactical squad was twice what it was now and a 1K army was a leader and three squads.  But the question is whether this matters? Some might say an army with two units and a hero isn't really an army at all and that even at 1000pts you'd hope to field more than that.  Having said that chaos is a bit of an extreme example with very expensive elite troops, but I do think Mike is right about the overall trend.  So again does it matter? We'd be interested to hear peoples thoughts.
Posted by brownk29 at 18:51:00