Games Workshop has tried all sorts of things over the years, but through the ups and downs I have generally been impressed with the quality of the models they have produced. After a spell of selling a few dodgy plastic/metal hybrid kits in the late ‘90s, the quality of the kits (to my mind) has improved again. Some of the recent plastics have been excellent, no doubt about that. And despite my complaint about pricing, the models look great on the table as well. Then we were offered something even better...
I was looking forward to GW’s Finecast range when it was first brought out. Forgeworld resin models had been out of my price range for years, and I was keen to see what working with resin would be like. So... I did the proper thing and walked into a GW store (ignoring their sales pitch), and purchased a Finecast Zoanthrope. When I got around to opening the blister pack later that day, I was somewhat surprised. I had assumed, like most people must have done, that my Finecast model was going to be finely cast. Unfortunately as you gradually learn over years, one should never assume anything. It was not a fine model at all. There were some lumpy imperfections on the main body, which annoyed me... not so much because I couldn’t fix those problems (using a file). I was more irritated that a GW employee had gone out of his way to ‘big up’ the quality of what I had bought, just a few hours earlier. 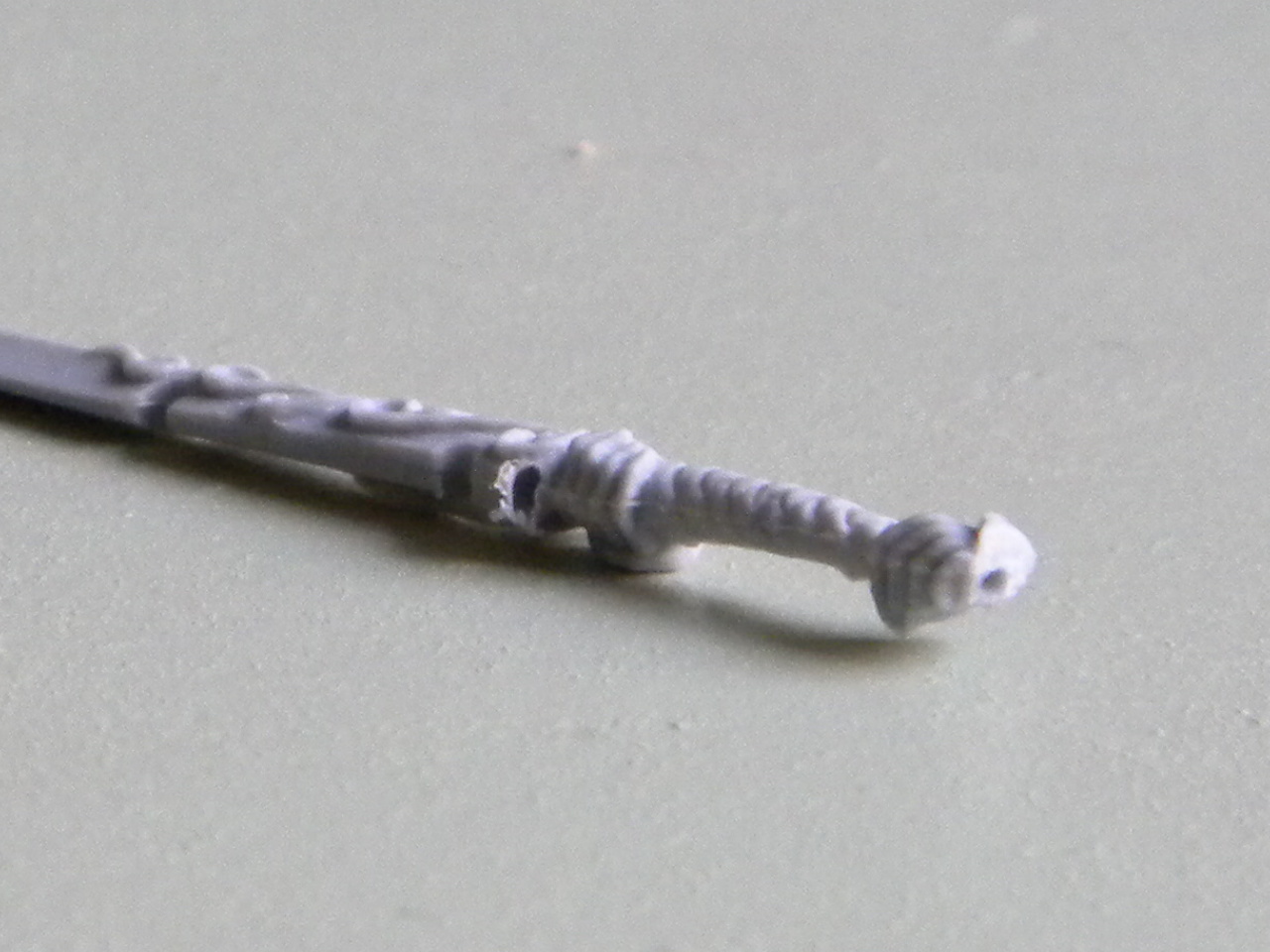 Oh my what a big hole!
After construction, the Finecast model never did look quite as nice as my metal Z’s. There was something about its gait that I was never quite happy with. Moreover the thing tended not to stay upright on the gaming board. It was not overbalancing as such, like some of the very old metal kits did. The model just seemed a little bit too top heavy and light for use on a crowded battlefield. The slightest touch sent it toppling. For that reason I sometimes kept it in a box, while it’s supposedly inferior metal brethren graced our games table.
When I moved to the big city, my Finecast Z was stored in its own section of a padded metal case. After some months of them not being handled, I unpacked my models. The Finecast model bent when I picked it up (by the base), and it broke off at a point of weakness (Z’s have a thin ‘tail’, connecting to the base). The metal Z’s, which I have owned for years, and have all been dropped a good few times, and are all still in one piece. 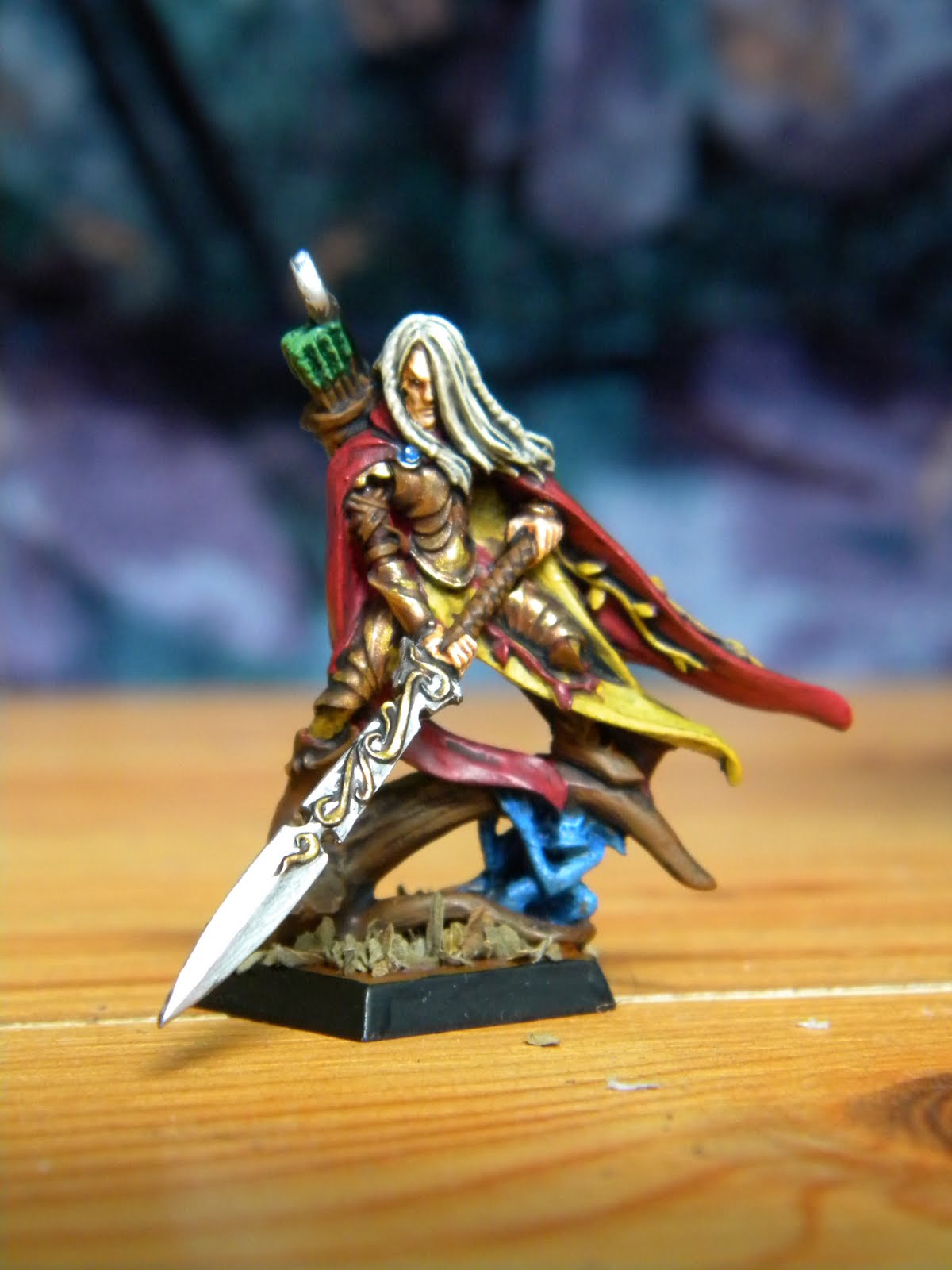 My first finecast mini - Keith
Maybe I had bought a ‘dud’ model, and the quality of Finecast is actually okay? - Perhaps. But it seems that I was not alone. People from my gaming group and various others have reported bubbles in Finecast resin. These faults might be unavoidable in resin, or they may not, I don’t know. Whether it is or not; GW are not afraid to charge a lot of money for Finecast, and to talk up its quality. Without listing the full extent of the horror, until recently GW was asking £15.50 for a single Finecast ripper swarm... (cough) ... mind you, even they realised that one was a complete a giraffe. The product was removed from GW’s website once their new Tyranid range surfaced. These prices, combined with the borderline false advertising associated with Finecast, which has caused me to be annoyed enough to write this short article.
So why might I buy Finecast, or even GW’s expensive (but good) plastics over a cheaper set from Mantic’s range? The answer is I no longer do. The Mantic models are almost as nice as GW plastics (some are, some aren't - Keith), and I get a lot more for my money (yes definitely - Keith). My only real complaint about Mantic is that a few of the smaller models are a tiny bit warped/bent near the legs. But hey this is plastic not Finecast, so any relatively experienced modeller can fix the faults with polystyrene cement, I managed it. Let it be known that poly cement is an amazing tool. The folks at GW clearly think so as well, judging by what they charge for the product.

The quality of the plastics has definitely gone up.

Buying cheaper but slightly dodgier plastics is not something I worry about greatly. To my mind that’s sort of the point of having a lot of plastic units to game with isn’t it? Besides, inexpensive plastics, even single pose ones, are great for kids who are learning to how to make models. No parents in tears when bits break off either, even if minis end up in the bin. We are increasingly offered less of those cheaper, expendable options with GW. That’s because GW isn’t for the average young enthusiast any more – despite the pictures of happy kids holding GW branded tape measures we see churned out by their marketing department. Instead, GW is rapidly becoming a big collectors range. And that said, arguably something of a dodgy collectors range, with Finecast being what it is.
I could ramble on further, but I will not. Instead, allow me to conclude with a polite message to the powers that be at Games Workshop.
GW - I can forgive the fact that we need more models to play your games these days. The games are quite good. However, please realise that you pricing strategy is driving people away from the hobby. You have some real competitors now, and they know what they’re doing. I can’t help but see that you are too precious to admit this. Please have a good think about your next business moves, because if they aren’t the correct ones, there might not be any Games Workshop stores in a few years.
So obviously this is a big topic at the moment and whilst GW don't seem to be in trouble yet they aren't doing as well as they were.  I agree with Mike that the prices are driving customers away, it's frustrating, we don't want GW to do badly, far from it, we love the worlds they have created and this fantastic hobby they introduced us to, but if they continue as they are we simply won't be buying much from them in the future.  Thoughts anyone?

So thanks to Mike for writing these posts, it's been a successful experiment I think and I'll have to have a look at doing it again some time.
Posted by brownk29 at 19:52:00