Today we have part 2 of my friend Mike's epic rant on the state of Games Workshop.  If anyone missed it yesterday here's a Link to part one.  Over to Mike.......

Previously I reflected on gaming in the 1990’s. Make no mistake; I think the current edition of Warhammer Fantasy offers us a better, better balanced game than the really old editions did. However a lot has changed at Games workshop. Here I comment on the current major bugbear of GW gamers, the cost of the hobby.
My proper first unit purchase was 20 Skeleton warriors at £12, I was happy with this affordable set. 15 years later I think that some of GW plastics are still affordable. For example £20 for 16 Skeletons/marauders/equivalent box sets isn’t too bad, inflation taken into account.  These plastic sets are also all well designed, easy to assemble and come with some extra bits and pieces. Moreover the units have long been available, along with a few more choice units in battalion box sets. This makes all of the units included a little more affordable still; even if a kid who pays with his paper round money might struggle a little. That’s the positive bit. 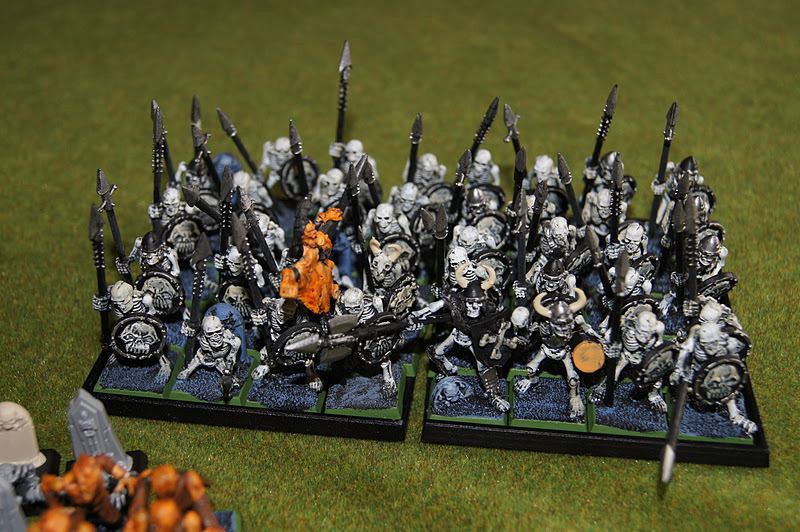 Some of the classic skeletons

The Empire battalion set, now available at £65 (I purchased it at £60 3-4 years ago) stills seemed to me to remain a fairly reasonable buy (for 4 units). But when I looked at GW’s website recently, I realised the photograph on the box had changed, and a unit was missing. At some point in time one of the units, a special choice, the Greatswords, had been removed from the set and replaced with the old cannon model. The cannon retails at £15.50. Greatswords are now available as a separate set only, at £25.50 for 10 models. No new moulds here and slight price rise as well.
The astute among you will realise this is the sort of move that GW has become very, very good at in recent times. While some of the older plastic troops (for now) are just about within financial reach of the average collector, we gamers have to pay quite a lot of extra money for the special and rare choices that are rapidly filling the army books. Similarly, in 40k Marine players will be familiar the making the painful choice between forking out for a Land Raider (now £45) or another purchase that contains about the same amount of plastic, but is worth considerably less in gaming terms. Mind you that comparison might not stand any more, as most of the Marine and 40k prices in have been jacked up horrendously of late. 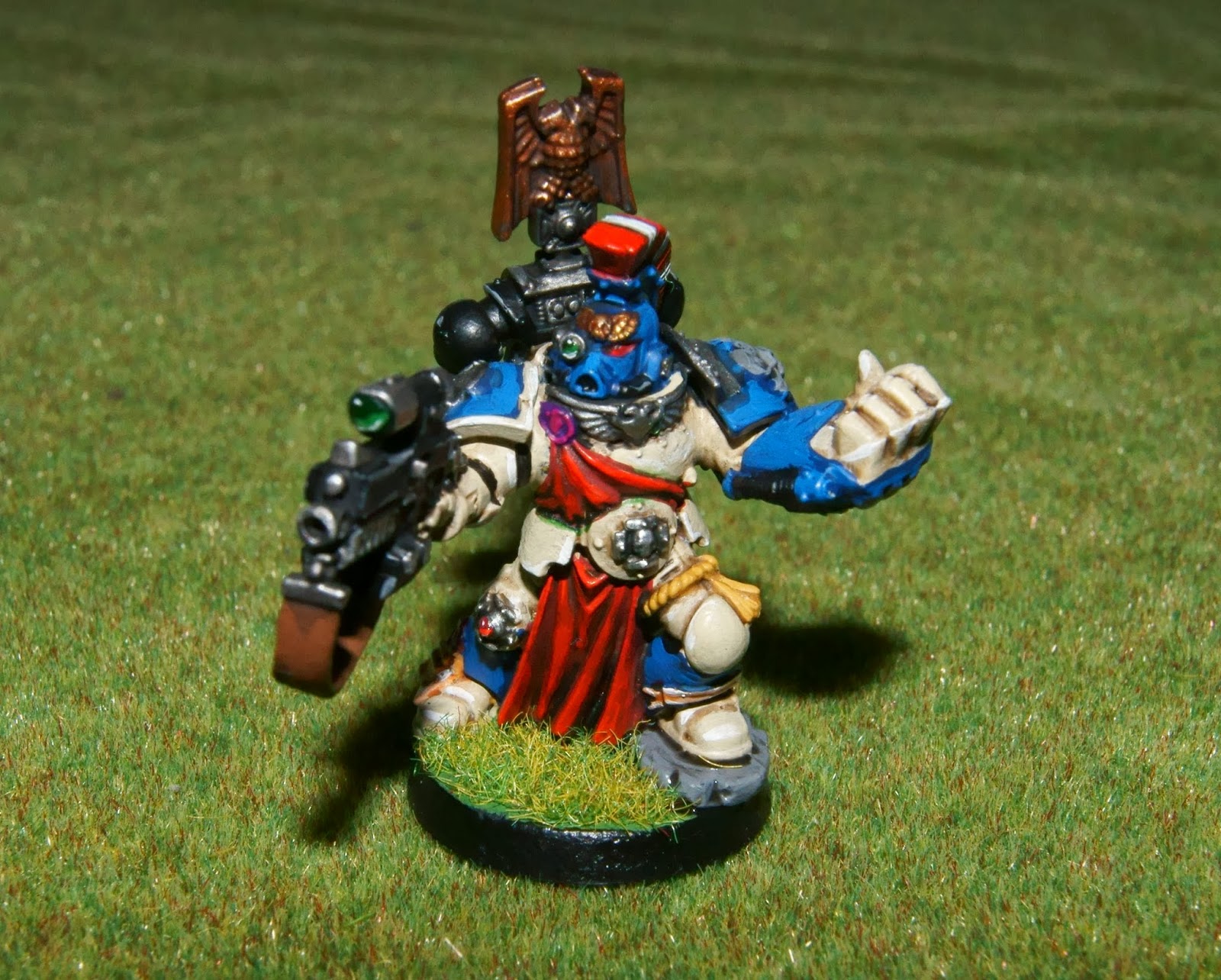 The Space Marine Sterngaurd kit is fantastic but £30 for 5 plastic marines is insane!
Personally I think that if sanity is to be restored to the hobby, then there has to be some sort of basic ratio between the amount of the material a model is made from and its price. £1.25/model (Skeletons/Marauders) and £2.55/model (Greatswords) are all plastic models, and about the same size and weight, but the prices are very different. There may be variable design costs, and inflation of course – but work out the percentage difference in cost between some model sets, it’s an eye opener. By doing this sort of thing, GW is really saying that models like the Greatswords are now real collector’s pieces. Only the wealthier collectors will be able to field these choices in any number, and that’s that (and don't forget that 8th ed fantasy encourages bigger units - Keith). It’s quite something for a gaming store that markets its games as family friendly products. GW doesn’t see things that way though, as I realised when I saw what it was charging for some of its actual collectors pieces, in Finecast of course.
Back in 5th Ed, flawed as it was, all one had to do was spend £8 on a durable metal hero/lord and that purchase made a real difference to the army – but not any more. Nowadays one really does have to purchase a number of different sets in order to stand a chance of having a genuinely competitive game. GW knows this and it has clearly adjusted its prices accordingly.
Recently I had to make a decision between purchasing the Empire battalion and another £65 set, Mantics Deadzone. Because I didn’t know too much about Mantic, I considered delaying my Mantic purchase in favour of the battalion. However because Greatswords had been but cut from the battalion set, I plumped for Deadzone instead. As it turns out Deadzone is a wonderful set and good value for money to boot. It will be a central part of my gaming life for some time to come. (Deadzone is great, look out for my review coming soon - Keith) 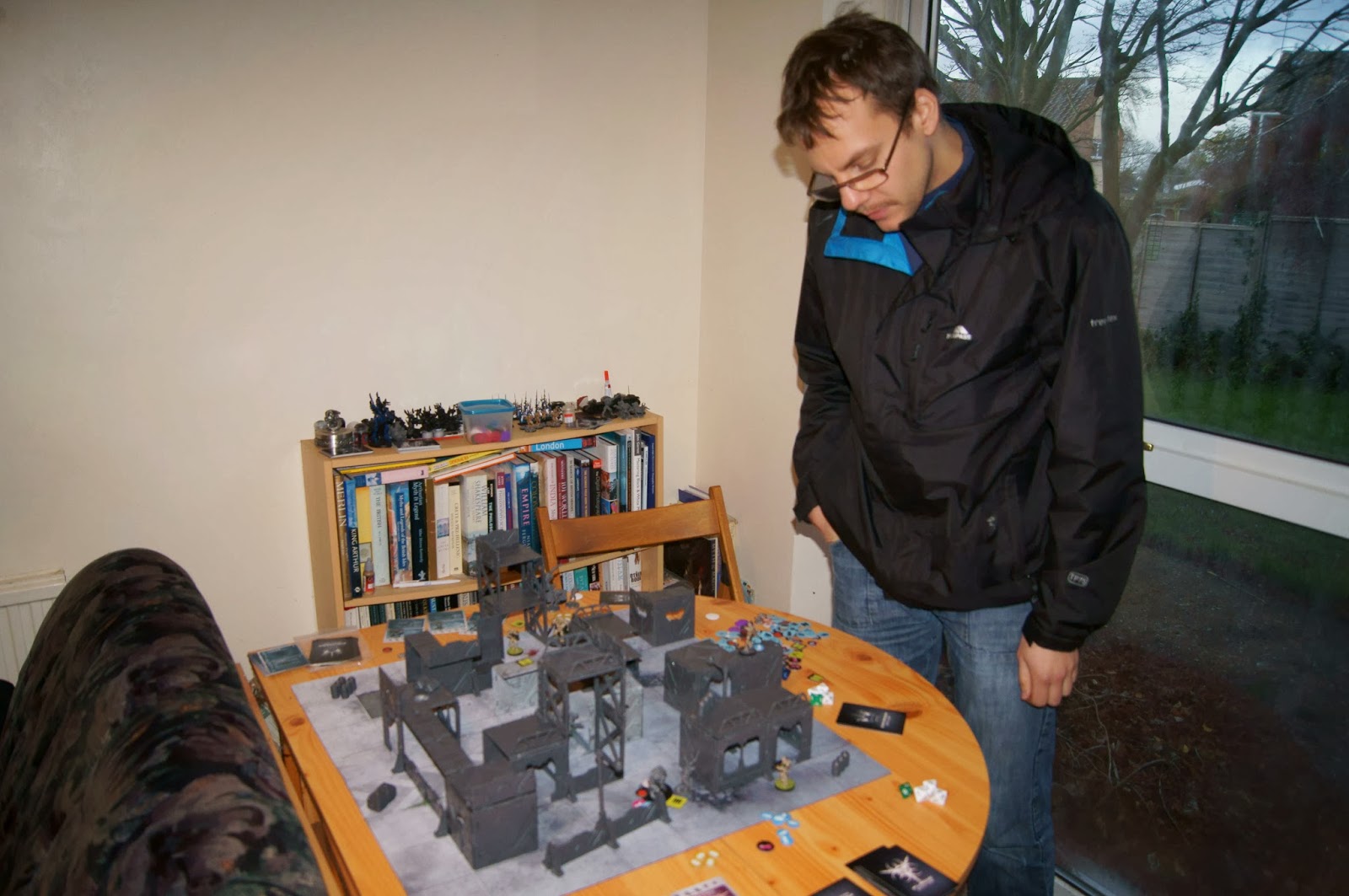 Mike considers his next move in a game of Mantic's Deadzone
A further nasty surprise arrived last week in the form of White Dwarfs preview of the new Tyranid range.  It’s all nice looking stuff of course, it always it. But once again a lot of the items are expensive, even the troops. At £33 for 3, we may expect significant upgrades to the Tyranid Warriors in the new codex…. . As for the choicer models at £48 a pop - nice as it is, the new Harpy will not be on my list of future purchases.
Many years ago, my old man bought a bag of chips in St Pancras Station. He embarrassed me at the counter by saying, “at that price I’d expect them to be gold plated”... sadly I’m starting to know how he felt… Goodness knows how many Mantic Enforcers one might be able to put on a table for £48 (31 for £50, including 2 10 man normal squads, a five man assault squad, a 5 man heavy support squad and a hero - Keith).
In the final part I’m going to comment on something that has impressed me over the years -The quality of the models.


Oh dear, price, perhaps the most controversial aspect of GW's behaviours over recent years.  Ultimately I think the prices are too high and that's been reflected in the recently announced poor results.  I think it's a hang-over of the pre-internet days when for many people GW was the only readily available source of miniatures, and I would spend all my hobby budget in GW no matter what the prices were. I was (am) addicted to buying minis, so they could keep rising prices and I would still buy them.  They now have a lot of competition that I can buy from at the click of a few buttons.  I still spend a lot on minis, but a lot less of that money is going to games workshop, their share of my budget has decreased from 100% to maybe 30%.  If I'm a typical customer that spells disaster.  I love most of their products, but the prices are making me go elsewhere.  I think Mikes missed one issue with his proposed plastic/price ratio though and that's that the moulds are the main cost, and cost similar no matter how many times you make models from them, so minis that will sell less units (like rare units and heroes) will have to cost more than tactical marines for example, so as to recover the costs of making those moulds.