I've read white dwarf magazine for many, many, years, the first issue I bought was waaaay back in 1992, and it was with some trepidation that I received the news of the demise of white dwarf as we know it and the creation of two new magazines; white dwarf weekly and warhammer visions.  I have a direct debit subscription that I set up around 4 years ago, this means I got both of the new magazines to have a look at this time, although in future I'll be getting warhammer visions instead, which is very odd as I subscribed to white dwarf..... 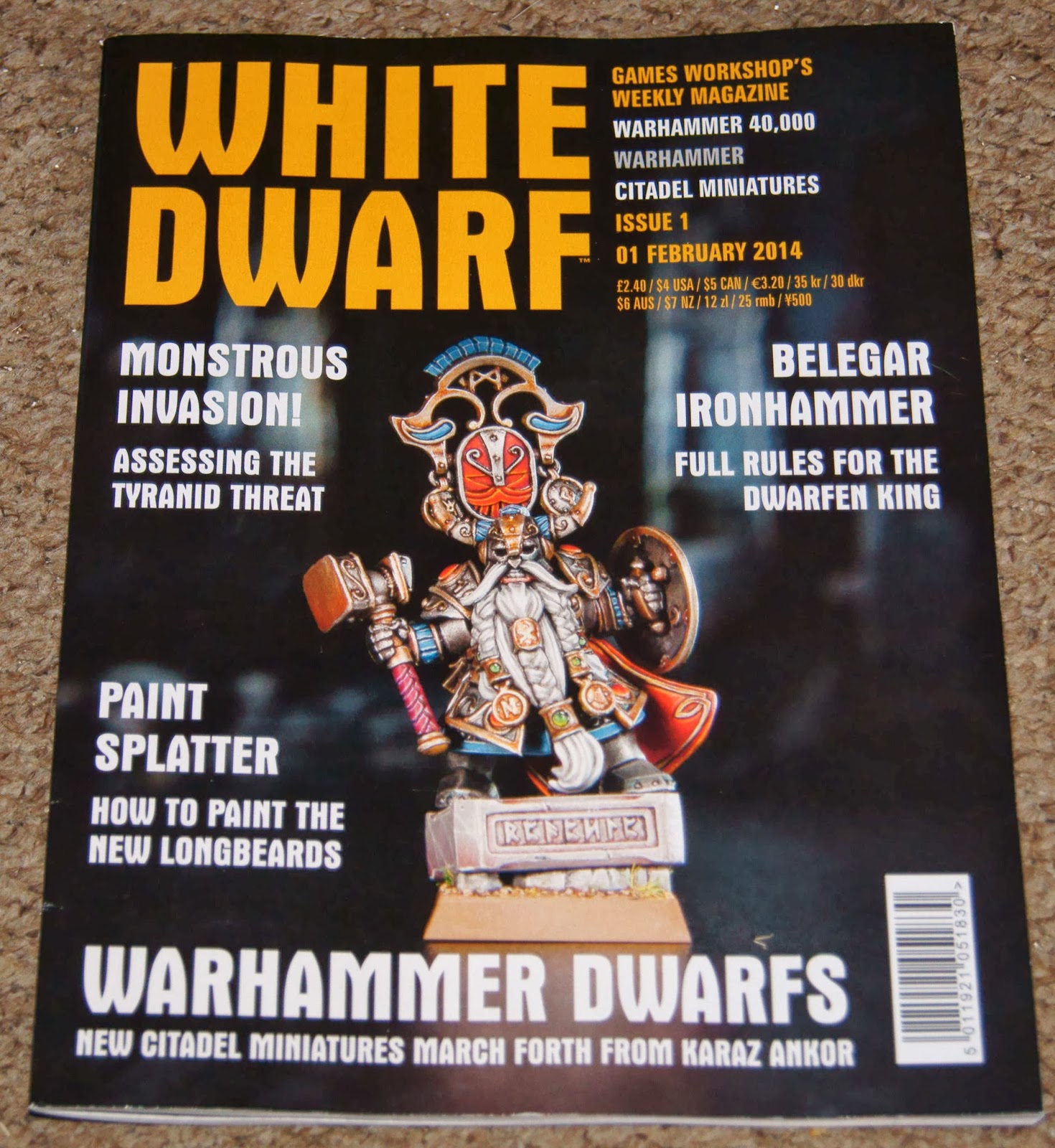 Lets start with white dwarf weekly, it's 32 pages long, and apart from that it's very much like white dwarf has been recently.  About a third of the issue is new releases, then we get Jervis (who's better than usual), a somewhat simple tyranid tactics article, then paint splatter and an explaination of how to use plastic glue (useful for kids maybe).  The back 10 pages of the magazine are rather good, we actually have rules for the new dwarf king, and a couple of tips on using him, we then have designer notes for the new models.  The magazine ends on 5 pages of 'the week in white dwarf' which is a bit of a mish-mash of little tit-bits, I really like this section.  The more condense format works and it's much better than I was expecting.

White dwarf weekly is only available in GW stores, and there's no subscription service.  I think this is nuts for a weekly magazine, a lot of people won't be able to pop into a GW every week and I think it's only going to harm sales and exposure, which ultimately is what WD is all about for GW.

I like this new bite-sized white dwarf and the weekly format. but in the end it feels like GW have taken the old white dwarf and then split it into four bits and racked up the prices.  I won't be buying this every week, but will problay pick up the odd issue, espically when interesting rules are featured.  If there was a subscription deal I'd consider it (price dependant). 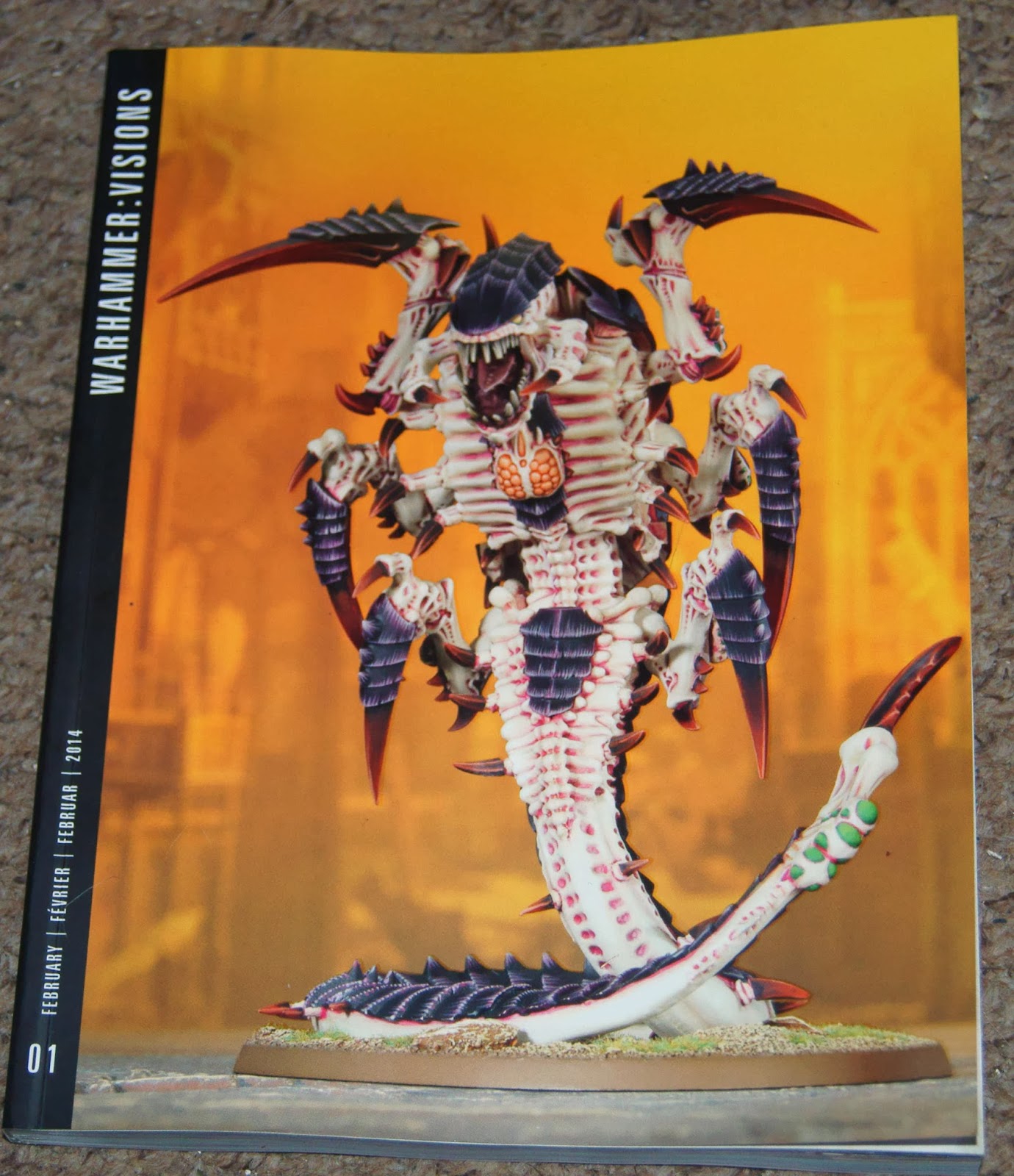 Warhammer: Visions is the new monthly mag, very oddly it has a smaller footprint than WD, it does have a whopping 228 pages though.  Unfortunately it's very dull, it's a picture book, that's it, pictures after pictures after pictures.  Mostly of the standard studio models we've all seen before (often they show you the same model many times in different settings), there are some interesting fan models as well though.  What there isn't in warhammer visions is much text, at all, and what there is in all in English, French and German, which I find very annoying, maybe they know it sucks and are preparing to only have to do one print run as it won't have to be very big.

The price of warhammer visions is insane, £7.50 for a monthly magazine, I had a look round my local smiths and couldn't find any other monthly at that price. I don't know anything about printing costs, but from writing this blog I do know that articles that are mostly pictures are much easier and quicker to do than those that are mostly words, this seems like another attempt to get lots of money for little effort.  Even with my cheaper subscription I'm seriously considering cancelling, it's ok for a quick flick through, once, but I expect more content from a magazine.


In conclusion, they are both way overpriced, however white dwarf weekly is an OK little mag, but unfortunately warhammer visons, which my subscription has switched too is pretty awful, they really should have given us the option of which to switch too.  Overall a sad sad day and yet more disappointment coming out of Games Workshop.
Posted by brownk29 at 11:40:00