I had a great afternoon gaming yesterday and one of the games we played was my friends new version of Risk, Risk: the Walking Dead, or Risk, with added zombies.  It turned out to be rather good fun.  I'd be surprised if there were many of my readers who hadn't played a game of Risk at some point, and it's been an important part of my gaming life over the last 20 years, and even in my wargaming drought years whilst I was at uni it was the occasional game of Risk that kept me in the gaming fold.

This afternoon's light entertainment led me to the mull over the collection of Risk games that I own, and have played over the years and to pose the obvious question, which one is the best? If you could only play one version of Risk ever again which would it be?

So in reverse order of greatness I present my opinion of the 7 varieties of Risk that I've played; 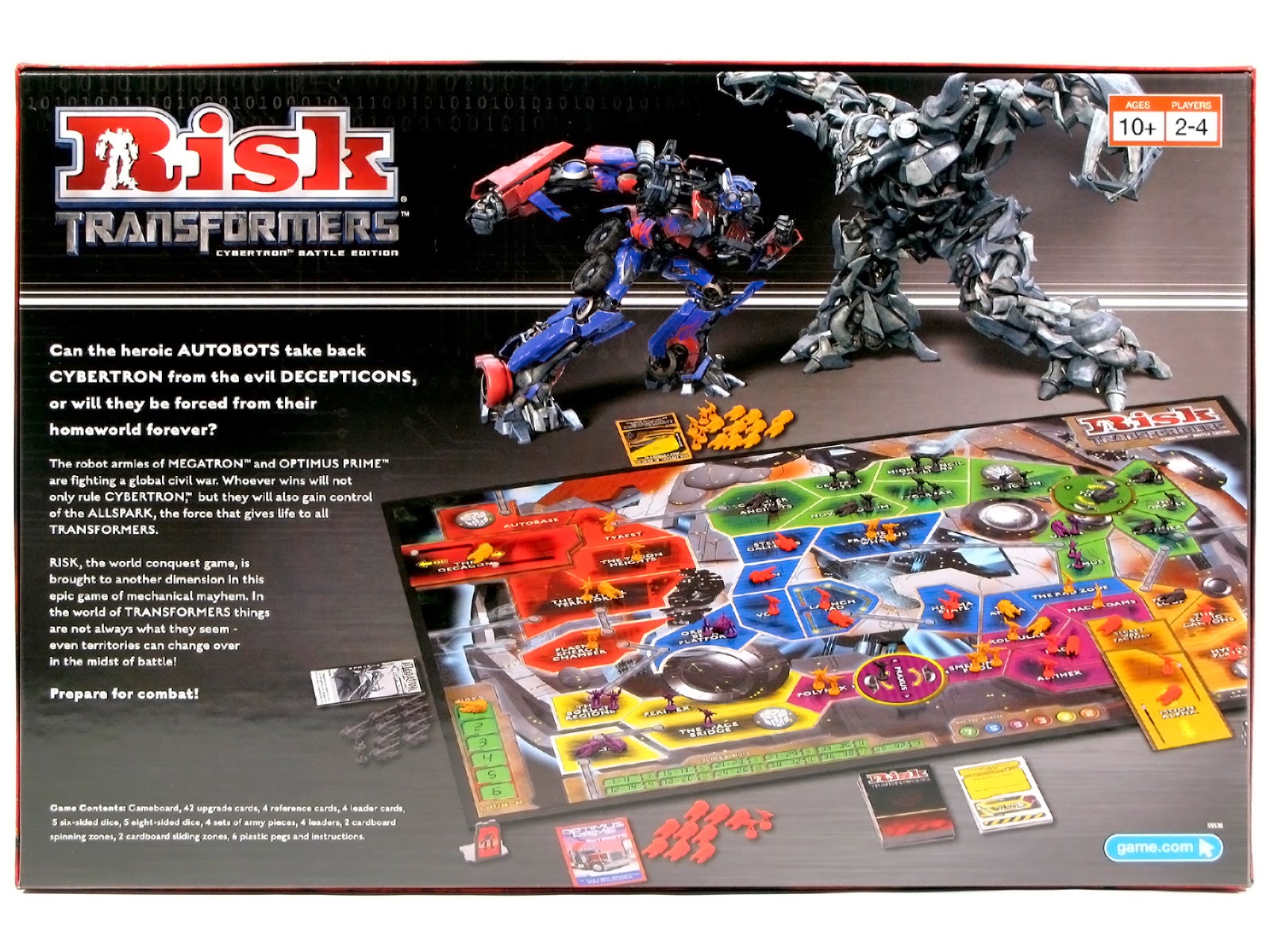 The worst version of Risk that I've ever played, loosely based on the new transformers movies.  Upto four players, but only two sides (autobots and decepticons).  The gimmick for this version are the transforming territories and leader abilities.  The two sides ruin this game, in every game I've played it's just throw everything at your opponent, and you either win or loose.  The only real positive is that games of this version tend to be quick (we had game end on turn one when the first player effectively wiped out his opponent with his initial attack). 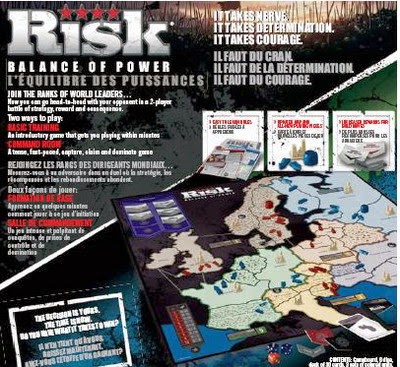 Balance of power was the attempt to create a 2-player version of Risk that worked well, centered only on Europe.  It introduced a neutral army that only defends and never attacks, it doesn't quite work, whichever side gains a slight advantage then steamrollered the other.  I played a lot of games of this at one point trying different ways to make it work, but we never quite could, Risk is a game of 3+ players. 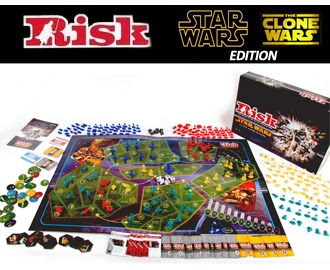 This is another version with two distinct sides, the republic and the seperatists, but in this version they don't play the same.  As always the game centres around conquering territories and regions (which will give you more men), you do get added starships in this version though which is cool.  The twist is the 'order 66' mechanic;  The game is set up so the republic forces will be in the ascendency during the early game and at some point the separatist players will have to call order 66.  When this happens you roll for each republic territory and on a certain roll (the longer the seperatists managed to wait the better the odds) each republic territory might fall to the seperatists!  The emperor is then also placed on the board and if the republic can kill him they auto-win.  It's an interesting twist and I like the fact that it plays differently for both sides, but the game really does come down to how well you roll when order 66 is called. 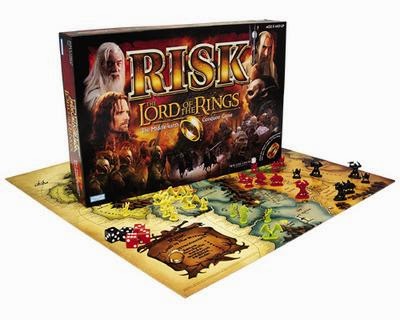 This version also has two sides, but based in middle-earth, it has a whole bunch of special rules about the ring moving across middle-earth and fortresses and leaders.  We normally got rid of most of these keeping only the fortress rules and then played standard Risk on the board.  What makes this version good is the map, it provides a really interesting tactical place to play Risk on. 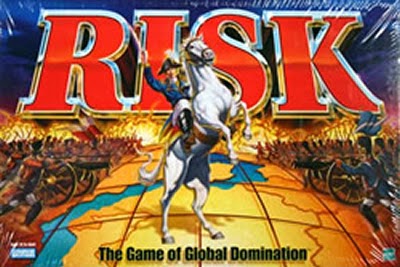 The classic and original version of the game, conquering the globe in the age of napoleon.  Get yourself 4-6 players and set aside a whole afternoon and you will get a good game.  Taking whole continents is the key to victory, and against a wily set of players this isn't easy, as everyone else will get a turn to take it off you before you realise the bonus from it.  The real world geography hampers this version somewhat as the map of the world doesn't give a balanced tactical situation and somewhat surreally the key continent is usually Australia.  The game also unfairly favours those that go first, with the last players often being battered before they get a chance to move.  All is not lost however, informal alliances can bring victory, it is rare that any player is in a position to resist the attack of all the others. 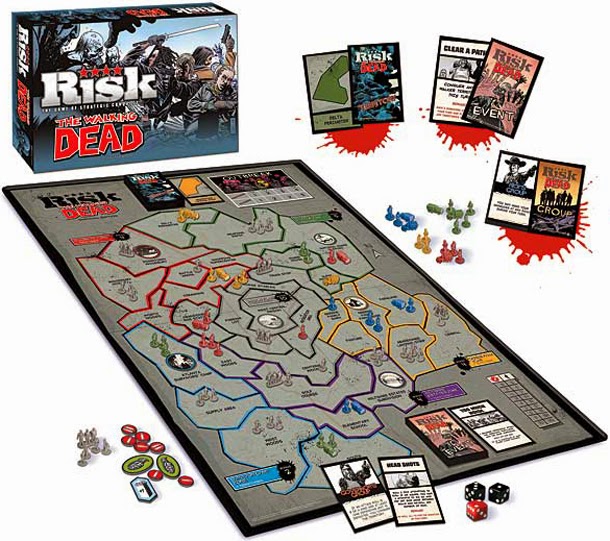 This is the game that inspired this post, and even after only having played a single game it's taken the no. 2 spot, and was very close to hitting no.1  This isn't a game of armies, but a game of ordinary people killing and being killed by zombies.  The basic gameplay is the same as any risk, the first thing to notice is the map has been designed to be balanced, it's not symmetrical, but regions strategic placing really do reflect their worth and there is nowhere really isolated ala australia.  The zombies are a major part of this game, as well as random initial placement, at the start of each round a number of random territories are attacked by zombies, this means the ususal Risk tactic of leaving your back territories with a single man is a risky one, you never know when those zombies will appear.  All this happens before reinforcements are distributed as well, an inconvinient zombie attack can deprive you of a lot of men.  For a bit of light hearted fun this is probably the best Risk, but due to the random zombie attacks it can all go horribly wrong even when you've done everything right.﻿ 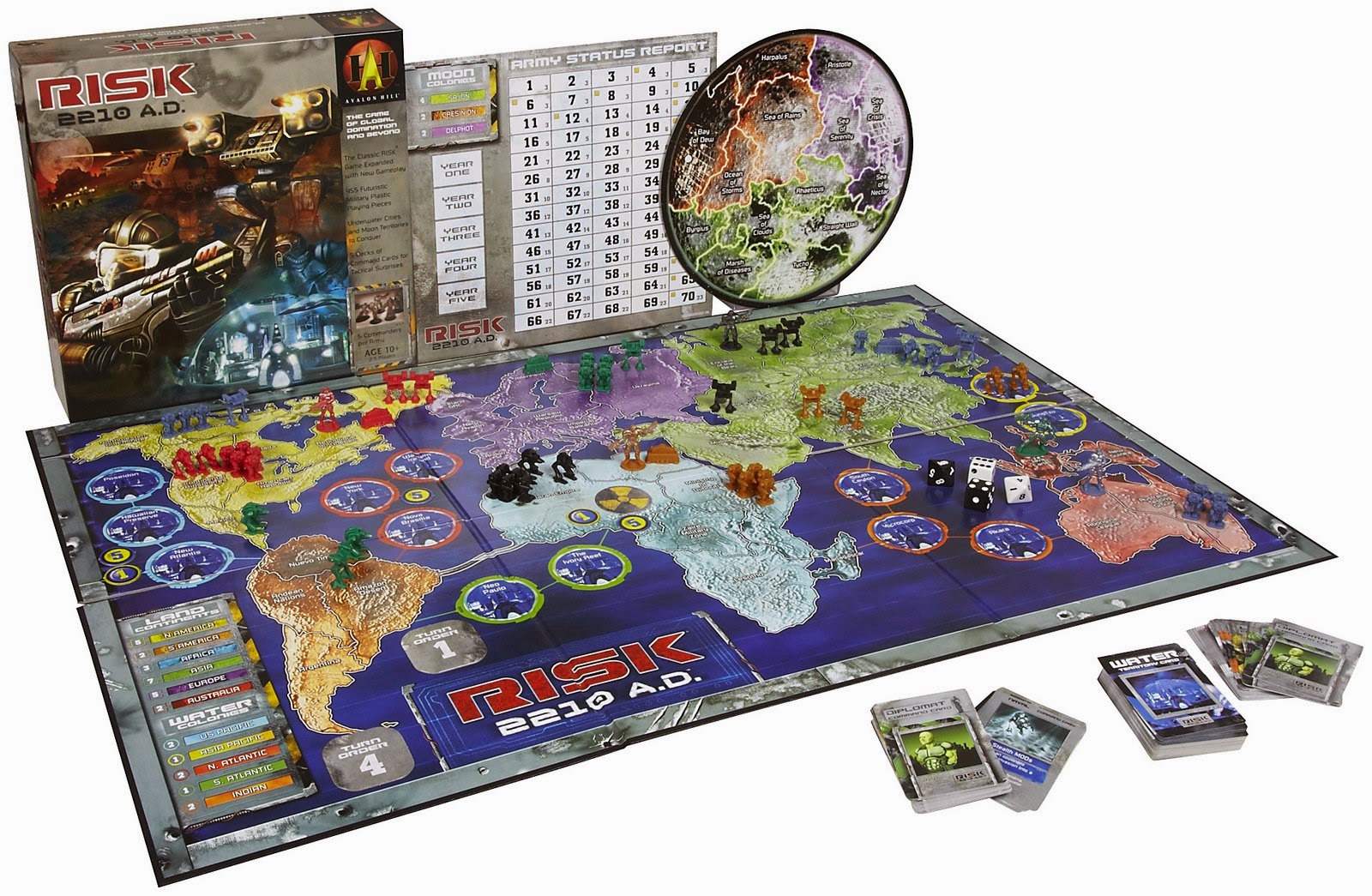 Finally this is what I think is the best version of Risk that I've played, Risk: 2210 A.D. this is a grown up serious version of Risk, and if you can only ever own one try and make it this one (annoyingly I don't have this in my collection).  You can use this set to play a full game of classic risk which adds to it's versitillity, but why would you really.  The basic gameplay and map are the same, but this game set in the future also adds new underwater and lunar territories.  The extra territories are great, they add a bit of balance to the map, but to be able to access them you need to invest in extra leaders/space ports which adds a new level of complexity and tactical thought.  The leaders are pretty handy in a fight too and go some way to negating the random dice fluxuations, although not entirely of course, this is still Risk!  This also has a built in turn limit which is good, the last turn is normally a desperate struggle and territory grab, just don't overreach yourself.


In the end though it doesn't really matter, in my experience any afternoon spent playing any version of Risk will almost certainly result in fun, just don't take it to seriously!