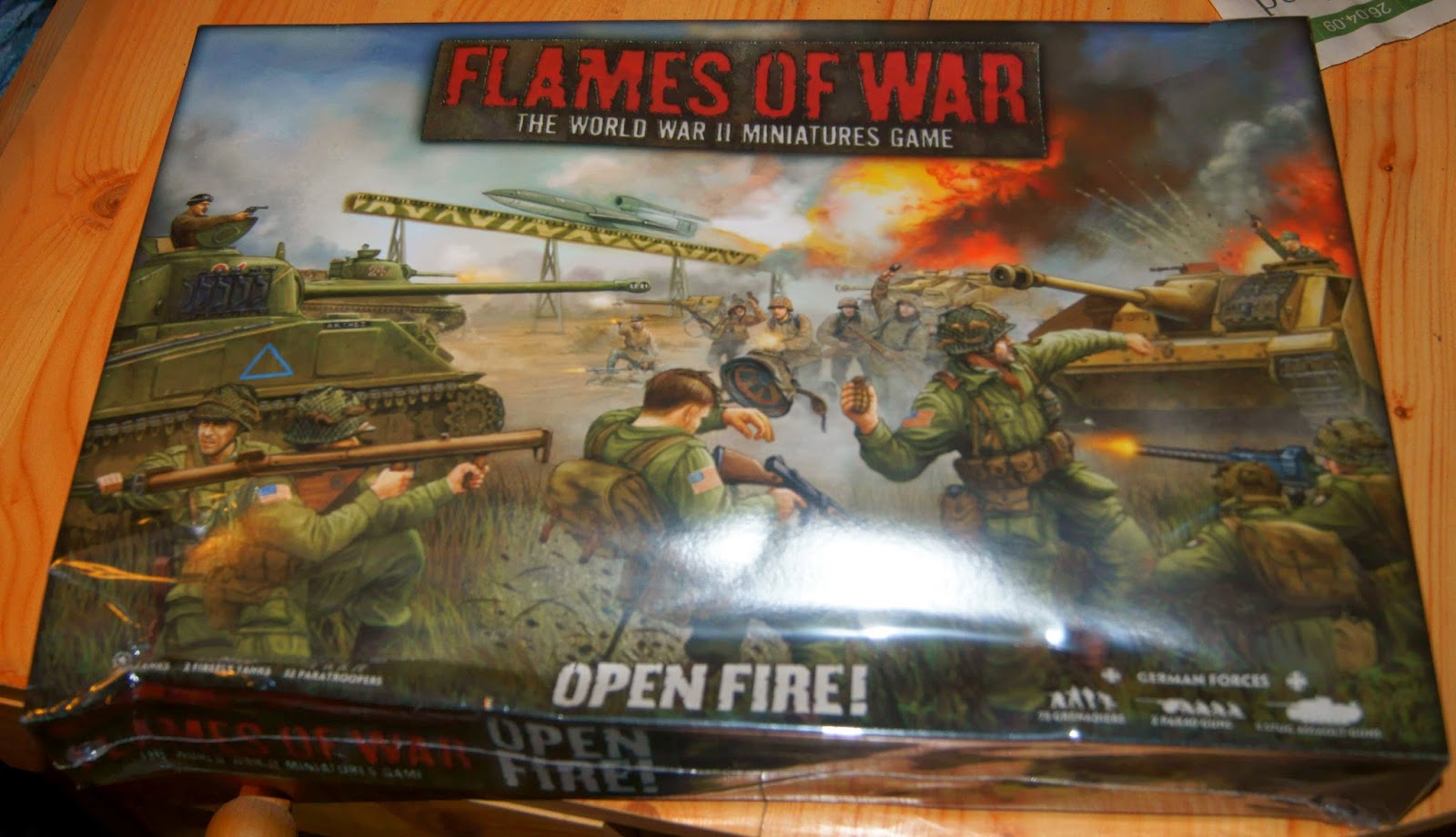 So this time it's really going to happen, I'm going to start playing flames of war, yes, definitely!  Some time ago (2011 actually!) I bought the 2nd edition starter set for flames of war, it wasn't much, just 5 tanks and the rulebook, I painted the tanks and had a quick flick through the book and that was it.  Over 2 years later I've now purchased the 3rd edition starter set (somewhat lamely also called open fire like the 2nd ed boxed set) and I have a cunning plan to make sure I actually get to play some games.  I'm actually only keeping half this set and my friend Mike is taking the other half, so we both get a starter army and have someone to play against!  I've got the Allies and Mike has the Germans.  Lets have a look what we got in the box. 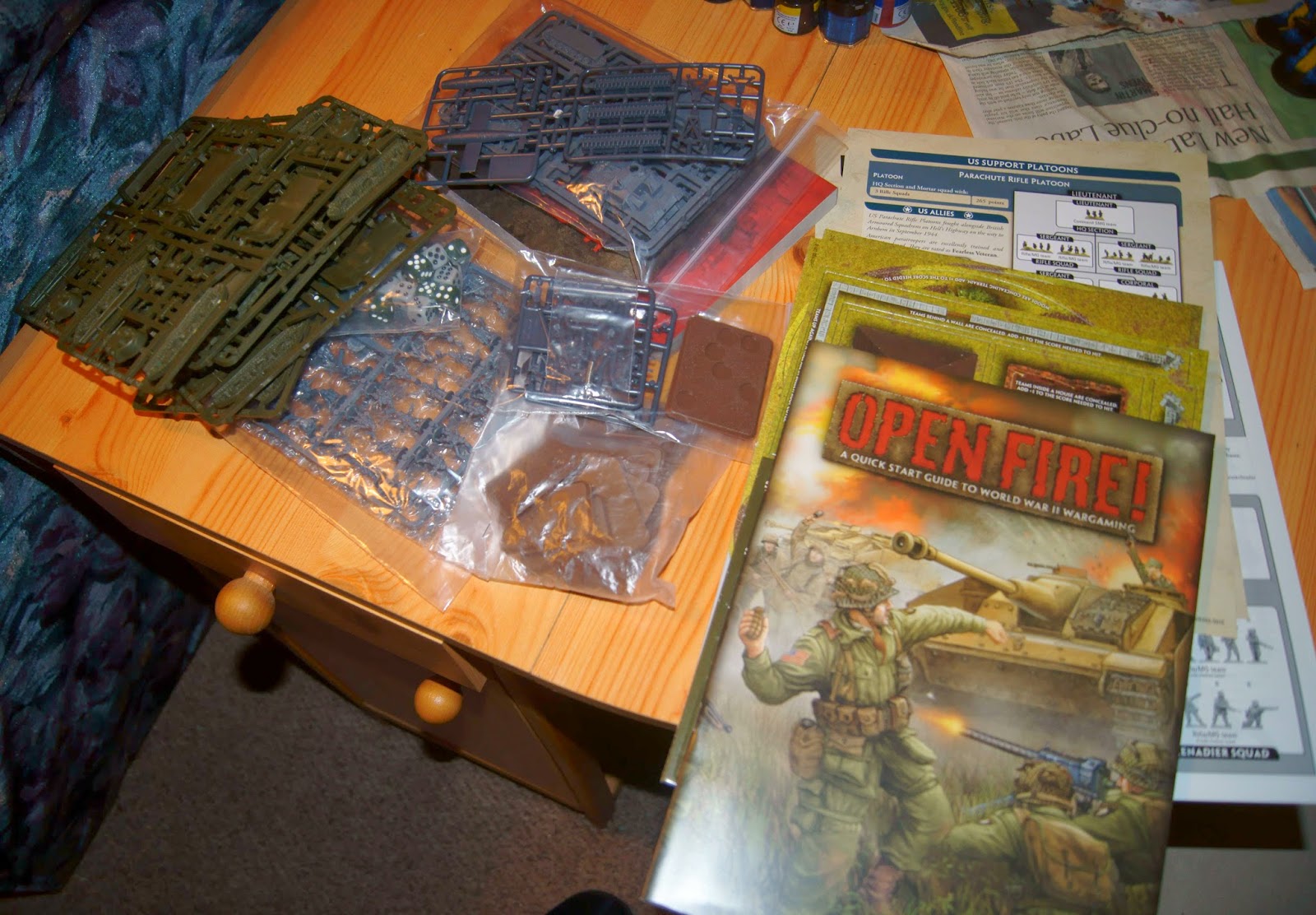 I'm going to start with the paperwork the box contains 2 books and two reference sheets.  The most important book is the full game rules, it's a A5 full colour format, much like the ones GW put into their starter sets, although this one is much thicker at nearly 300 pages!  Battlefront do produce a nice full sized hardback version, but I really can't see the need for me to go out and get it and I am very happy with this version, although I won't deny that nearly 300 pages of rules is a bit daunting.  The second book is the quick start rules this full size 50 page book contains the core rules in easy to swallow bites, considering the size of the main rulebook is this is very useful.  The best bit of this book is tucked away at the back, I was very surprised to find two army lists, not just the stats and points values for the troops you get, but actual army lists for a British armoured company and a German Grenadier company, which means you can start adding more models and expanding your game without the need to go out and buy an expensive hardback book straight away.  Finally the box contains two double sided army reference sheets which help new players to have their stats easily on hand.

Now onto the most important element of any set of this type, the miniatures.  The box contains two starter armies, one for the British (with American support) and one for the Germans, both are for the late war period and they both clock in at around 800 pts.  As I mentioned above I'm only keeping the Allies, so they're the only ones I've assembled, but it does actually feel like a real army and looks like we can actually have a proper game with what we've got in the box. 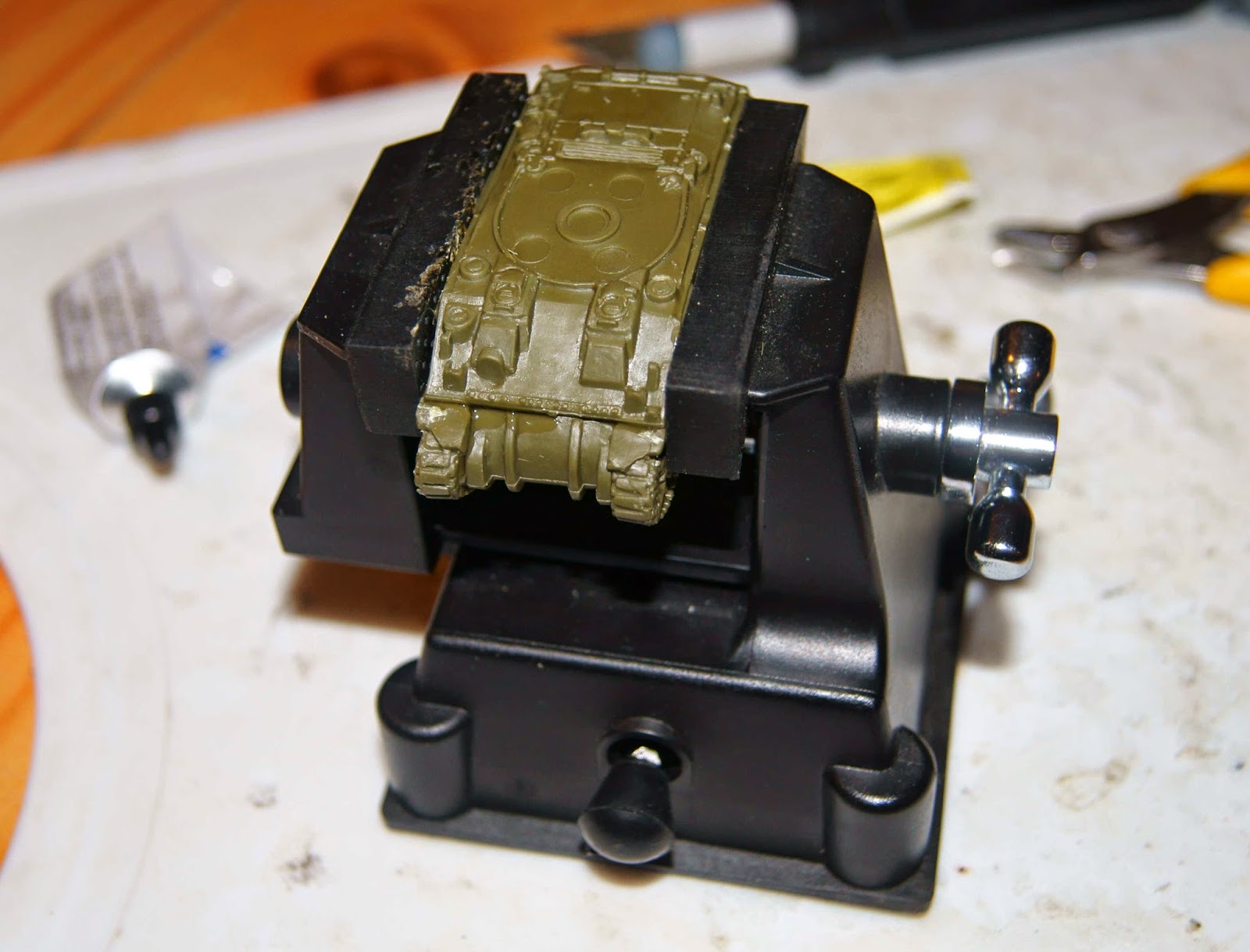 The bulk of the British force is 6 Sherman V tanks and 2 Sherman Fireflies arranged in one company HQ of 2 tanks and 2 platoons each with 2 Sherman V's and 1 firefly.  The British are also supported by a platoon of American airborne infantry that is made up of 9 stands including 6 rifle/MG teams, a command team a bazooka and a mortar.  The infantry is very good quality sculpted plastic's for such a small scale they really do look great.  The Shermans were a pain to construct, the joint didn't quite match up and I ended up having to place them in my mini-vice to get them to stay right as the glue dried.  However once stuck together they also look great, they retain the 'organic' look of the rest of battlefronts range and each sprue comes with a range of optional stowage parts that you can use to make all your tanks individuals.  I was also surprised to find the shermans came with little magnets which hold the turrets down and allow you to rotate them, they work really well.

Whereas the British force is a tank company with infantry support, the German force is an infantry company with armoured support.  The bulk of the force is made up of 2 platoons of grenadier infantry supported by a company HQ, 2 anti-tank guns and 3 StuG assault guns.  That's 4 platoons in total, which isn't a bad way to start a German collection.  the infantry are the same high quality as the Americans, I've not tried to put the stuG's or anti-tank guns together so can't really comment on these. 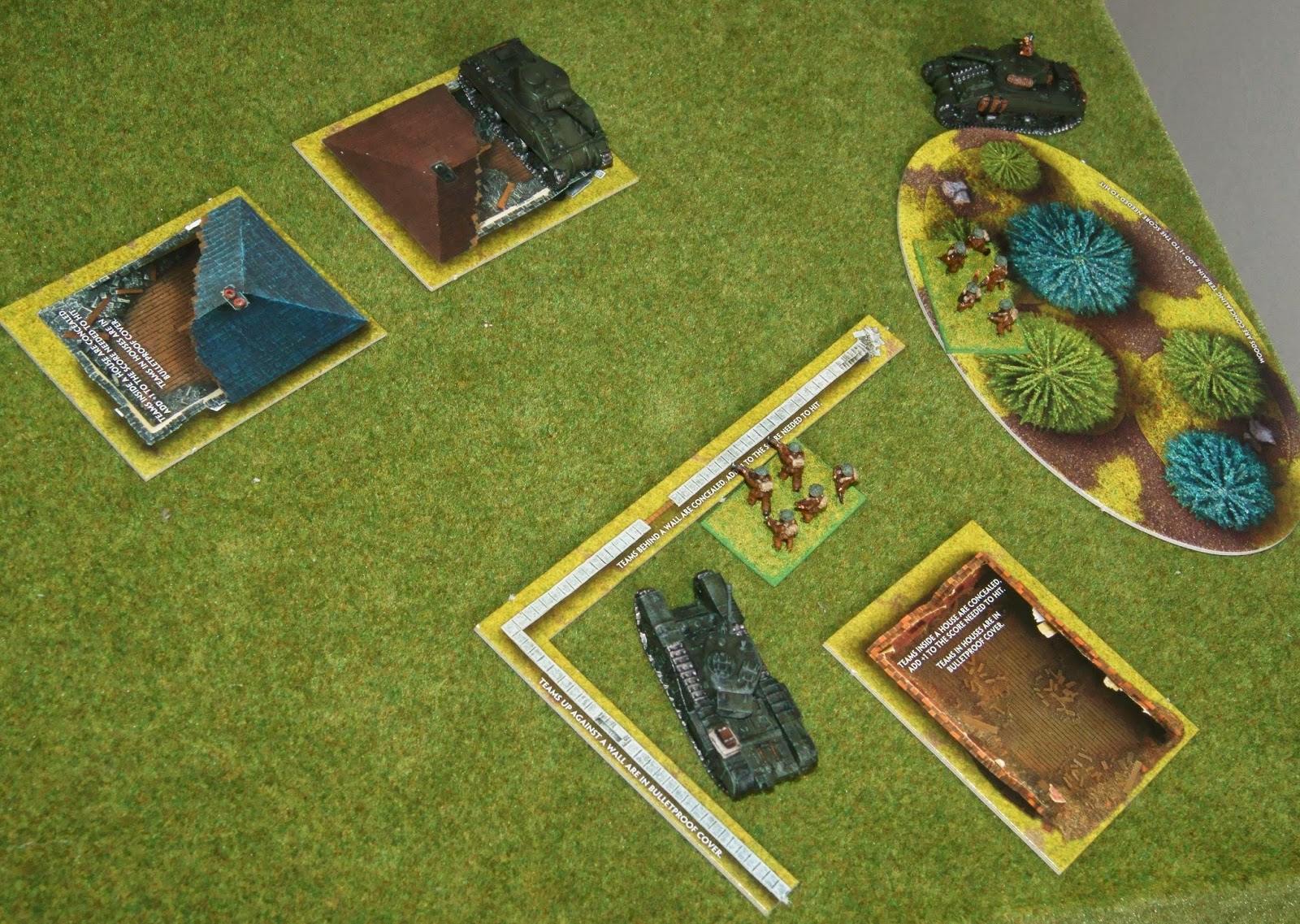 One thing that starter sets are often missing is any sort of terrain, it takes up valuable box space that could normally be better utilised by adding more models, but ultimately every wargame needs terrain of some sort or there really is no game.  Battlefront have worked out a good solution to this, firstly they've included a plastic V1 rocket launcher, which is rather nifty, unfortunately I said Mike could have this to go with his Germans, so I don't get to assemble it.  What I do get to keep though is a set of flat cardboard terrain that represents woods (4 lots) houses (3) and walls (4).  Now it's clearly not ideal to be using flat 2D terrain in a 3D miniatures game, but I'm really glad they included it, it's a good stop gap till I can get some more 15mm terrain sorted.  As another nice touch it actually has the rules for the terrain written on the card, this will clearly be great for new players as it's another thing that they don't have to remember. 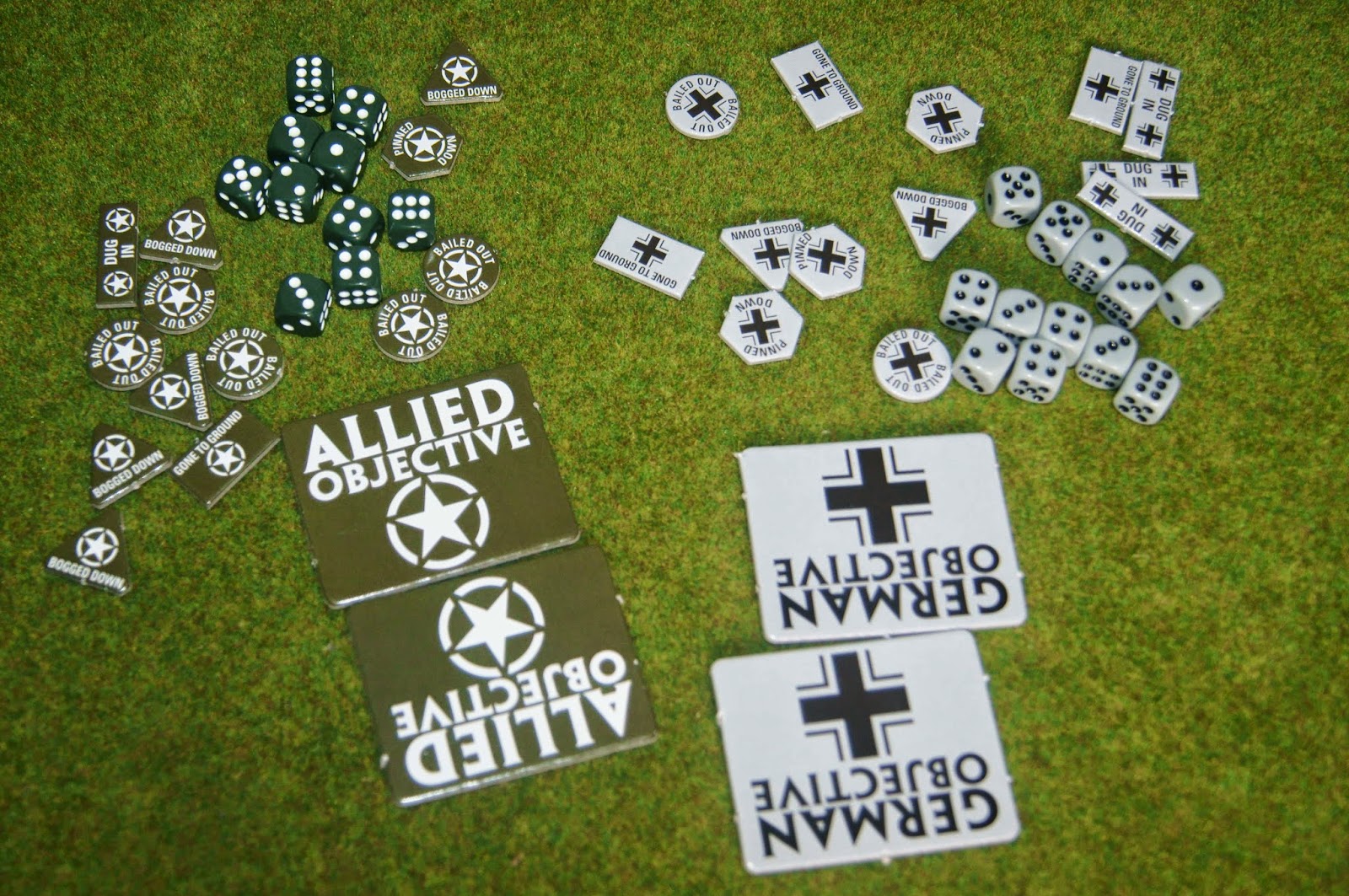 Of course you also get a bunch of card tokens that you need to play the game with and some dice, it's a nice touch that you get allied & german coloured dice.

Overall this is an excellent starter set, and I'd like to see more like it, the full rules, two real balanced forces and enough terrain to cover a reasonable battlefield makes me a happy customer.  As I write this I've nearly finished painting the allies from this set, so expect to see them soon.