The last 2 isuses of White Dwarf magazine have featured an interesting pair of articles by Jervis Johnson featuring his 8 'desert island models' (based on the popular radio show 'desert island dics').  I thought it was such a good idea that I'd steal it and present my own version.  The rules (if you don't know) select 8 models, one luxury item and one book to accompany you as you are marooned on a desert island.  These aren't what I consider to be the best 8 models ever sculpted, but rather 8 models that mean a lot to me and have been important to me over my 'career' in wargaming. so my first (somewhat predictable choice).......... 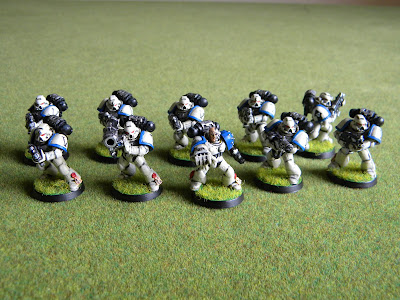 I started in this hobby with the board games heroquest and space crusade, and in late 1993 I walked into Games Workshop in Luton and bought my first proper citadel miniatures.  They were a Space Marine tactical squad, not this one, but on of the flat 2nd edition single pose models that had just come out.  Looking back They were atrocious models and I got shot of them some time ago, but I still love space marines.  The squad above is the 5th squad of the 2nd (battle) company of the Vengence Templars chapter (my own creation).  What I also love about these (and the rest of the space marine range) is the flexibility and interchangibilty, we've come along way in this hobby from my first tactical marines all those years ago, but the space marine tactical squad is a staple of mine and many others collection.
High Elf Noble
﻿ 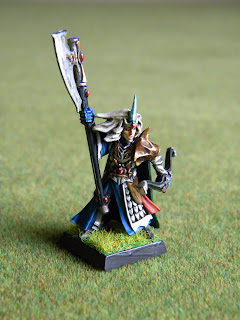 This is made from the plastic High Elf hero kit, I've armed him with a great weapon and a longbow.  He's called Elador Surebow and has lead my 1000pt high elf army on 7 occasions (6 wins and a draw, hes either good or lucky) and has only fallen once (to a etheral vampire, that'll teach me not to give him a magic weapon).  I really like the charcter kits they do now and the options they provide, I'm pretty proud of the paint job on this guy too.  My high elves are my lastest warhammer project, started when Island of Blood came out last year, I now have 2500pts of high elves painted and another 500pts sat on my desk ready to go.  I've really enjoyed playing with them, I love the fact that whilst they can dish out an awesome amount of damage they're also so incredably fragile, its been a refreshing change from my previous main armies of dwarfs, chaos warriors and vampire counts all of which are tough in their own ways and far more forgiving to play with than the elves are. 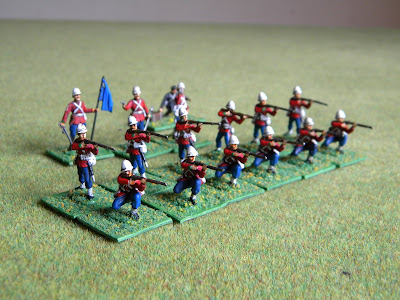 These represent a moment of liberation for me, the moment I expanded my hobby to be far more wide ranging than just playing and using GW models/games.  I was in a hobbycraft store when I spotted these on the shelf, 48 in the box for a fiver, being used to GW prices I couldn't quite believe it.  Now don't get me wrong these are smaller scale than GW figs and nowhere near the same quality, but still 48 figs for a fiver.  I got home painted them up and then did some reserch on the internet and found plastic soilder review, a complete library of all the sets produced in 1:72 scale in plastic, this lead me to buy some other sets and I now have a complete british army for the zulu war as well as armies for the 1880s sudan, the napoleonic wars and WW1.  It wasn't long after this I bought my first Mantic games figs as well, this is an important moment in the history of my collection... oh yeah and I can recreate my favorite movie, which is of course Zulu. 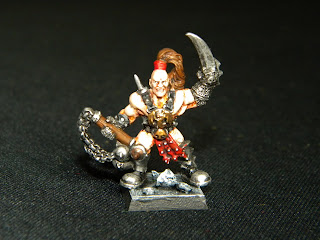 My favorite model from one of my favorite games.  This was the only character I used for years, I got him soon after I got Warhammer Quest and got him upto level 7 before being distracted by something else.  GW have put out a number of pit fighter models over the years, but I still think this one is by far the best.  The collection of extra warriors were all fine models actually, the witch hunter and warrior priest were other stands out for me.  To my mind WHQ is still one of the best games ever put out by GW, the two particulary great mechanics are the random dungeon generation (I don't know if that was the first time it had been done, but it was the first time I'd seen it).  Secondly the removal of the need for a gamesmaster and the rules governing the types and actions of the monsters.  I had one friend at uni who actually used to run his Dwarf Slayer on his own when he was bored.
Posted by brownk29 at 15:24:00