Over this weekend I've got my first games of dreadfleet in, I played scenarios 1 & 2 on saturday night (slightly inebriated after a trip to a beer festival) and then scenarios 3 & 4 on sunday afternoon.

The core movement and shooting rules are fine and work pretty much as I would expect a fantasy naval game to work, nothing revolutionary here, but thats not nessacerily a bad thing.  A lot of the ships stats are very similar, but have special rules that make them play differently and give them character, so far so good. 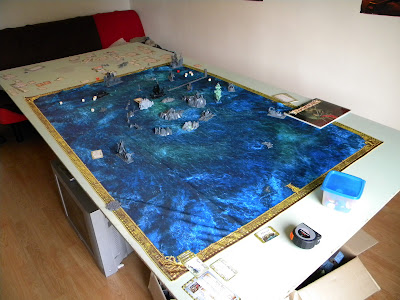 And time, the small games we were playing still took a couple of hours to play, which is a lot more than I was expecting, a lot of that time is spent resolving the mutitude of cards that come into play.

The scenarios link together to tell a story, and there is a real narrative present here, its a nice refreshing change to just fighting random battles like I do a lot of the time, after 4 games I was really starting to get into the story.  The scenarios seem to be nicely varied as well, and there is definately a element of trying to 'solve' it.  After narrowly loosing scenario 4 (it all came down to one dice roll) I did see a tactical error I made on turn one and wanted to give it another shot.

Now we get to the flaw in the game, and its a biggy, the game is so ridiculously random.  At the start of every turn each side takes a fate card which tigger random events, usually hurting somebody.  Thats two powerful random events a turn.  The events are just too powerful and random, also the deck isn't big enough and after a few games the events stop seeming random and unexpected.  The fate deck also moves the wind around as well, again this means the wind moves twice a turn!  So forget forward planning with your sail ships (how I loved using the dwarf steam powered ship).  I think the wind movement is actually more annoying than the random blood sharks etc.  I'm considering giving it a go with no fate deck and saying the wind is always strength 2 and is assumed to be in the side arc of all ships (unrealistic I know but at least you could plan). The other deck of annoyance is the damage deck.  When you take damage random parts of the ship are damaged, this means yet again more luck, as you can take 3 hull cards and sink, or a crew, a hull and a random one and basically carry on the same as before, the damage taken and effect on ships should be more closely linked.  Scenario 4 was the biggest game we played, with 4 ships a side, and it all came down in the end to one initaive roll, and it did feel like a huge anti-climax. 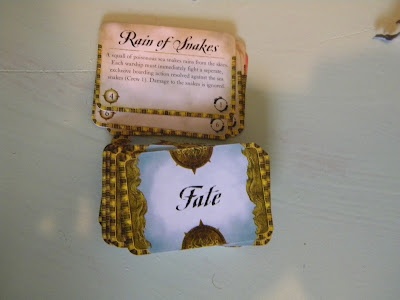 It looks pretty, but the randomness removes a lot of tactical play, I don't think its terrible, but you can't take it seriously.  The first couple of games I played were after an afternoon at the local beer festival, and it was great for that when I didn't want anything serious.  The next day when we used it for our sunday afternoon gaming it didn't suit so well and I wanted more (at least some) depth.  My mate summed it up perfectly when he said:

Its all a bit of a shame, I love the ship models and the core rules are fine, just why all the unnessacery randomness.

See my thoughts on the game contents here.
See an interesting alternative (more negative) view here.
Posted by brownk29 at 20:16:00