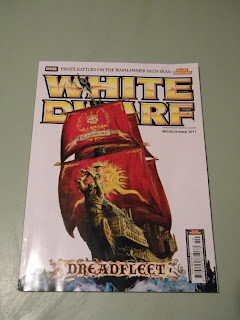 I've had the latest White Dwarf magazine for a couple of weeks now, and having absorbed it I have to say I'm starting to see a definate improvement.  The largest chunk of the magazine is taken up with the coverage of the Dreadfleet release, which if your interested in dreadfleet is great (if you have no interest in dreadfleet half the mag will be of no use to you).  The dreadfleet coverage includes design notes, a painting guide, two battle reports and a basic tactica.  The design notes and tactica were interesting reading, and I've refered to the painting guide several times in painting my own ships.

There isn't much in the mag for the two main systems, but at least what there is is very useful.  For warhammer you have scrolls of binding for the new ogre kingdom beasties, allowing you to use them in storm of magic games.  I hope this is something they continue, it makes sense from a sales point of view as well, I'm very unlikely to buy an ogre army, but I might by a thundertusk.

The 40k content is 3 new battle missions designed for use with the sisters of battle codex that has been in the last couple of White Dwarfs.  I have the main battle missions book and am a big fan of it, it really mixes up the battles with a few simple adjustments.  So a whole mag mainly full of real content, who would belive it, I hope this trend continues.

A interesting peice of news also appeared yesterday, the new White Dwarf subscription model, and prehaps unsurprisingly it's Grombrindal as a pirate.  It's a rather spiffing model and I'm sure it will be added to my collection.  I'm quite tempted to use him as a captain for a Dwarf crew for Cutlass. 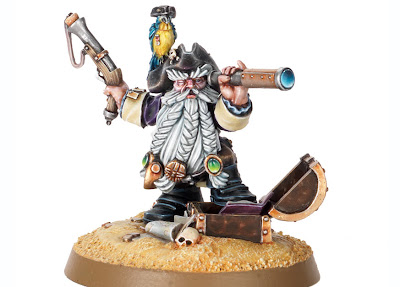