So day 2 and today I'm showing off some of my slayer models.  Theres something about the slayer cult that I really like, the fact that they're not just wild berserkers, the seeking of redemption and the ludicrous hairdos.  I highly recomend the Gotrek & Felix series of books for an insight into the slayers mentallity. talking of Gotrek & Felix 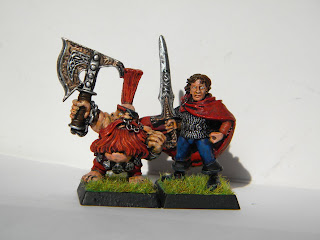 The origanal versions, both great models and I much prefer them to the newer versions. 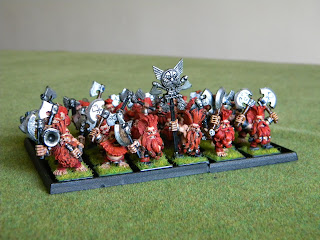 This is my main slayer regiment, quite a mix of slayer models from throughout their history.  Its 30 strong and normally has the job of holding a flank of my battle line, love their slayer axes rule and find in 8th ed I end up using double handed axes a lot more. 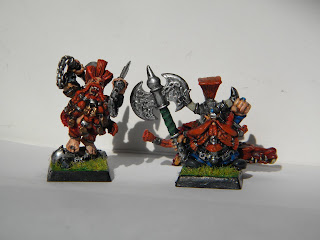 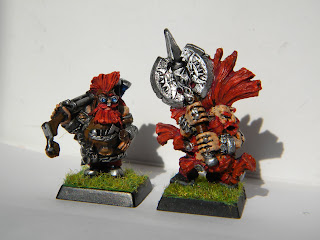 Another 2 interesting models, on the right  is my favorite daemon slayer model which was recently inducted into the citadel hall of fame.  On the left we have Malakai Makaisson a slayer engineer from the Gotrek & Felix novels, what I like about this is how it demostrates that slayers aren't frothing loony's as a few of the models suggest. 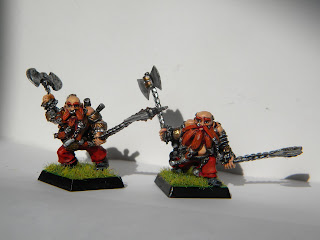 Here are 2 doomseekers from the storm of choas slayer list, it took me ages to get hold of these at a reasonable price on ebay (should have just bough thtem when they came out) and they can't even be used in a regular dwarf army, but they do look awesome. 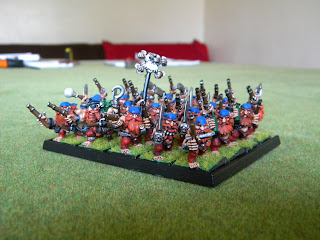 And finally one of my favorite regiments in my whole collection, my dwarf slayer pirates, a different aspect of slayer culture and really good models.  This regiment was the whole reason I bought a dogs of war army, although the regiment no resides in the cabinet with my dwarves.

Which opens up the question, where do poeple stand with dogs of war? are they still allowed to be played? We still use the army and haven't had any issuses translating the 6th edition lists to the 8th ed warhammer.  We only really allow dogs of war units in other armies with opponents permission, but I've never had anyone refuse to let me use my slayer pirates in my dwarf army.

The other thing I wanted to say today is that Avatars of War are releasing a plastic set of Dwarf Berserkers (clearly slayers) that look awesome and are at a sensible price point, I can't wait to add some to my army.
Posted by brownk29 at 11:38:00