So this week I'm going to be showing some of my dwarf army, its by far my largest army and by far my favorite, I just love all things dwarvish.  My army stands at about 16,000 pts and ranges from old 3rd ed models up to the latest plastics. 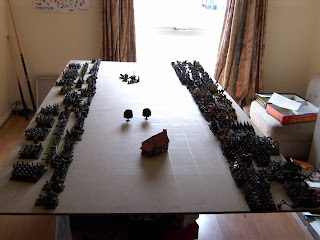 This is a battle from two years ago when my dwarf army (on the left of the 8' table) stood at 15,000pts and took on the combined might of 2 chaos armies, a skaven army and 2 orc and goblin armies.  It was a solid win for the dwarves.  The army currently contains 325 painted dwarves and 24 war machines (+ around another 40 unpainted dwarves), I'm going to spend all week showing a parts of my army, so if you have no interest in dwarves check back next week.

To start I'm posting today some of my limited edition dwarf models. 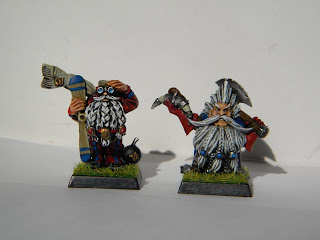 These are two different white dwarfs, the first is the current subscription model and the second is an older model released with (i think, please correct me if my memory's wrong) the 300th edition of white dwarf magazine. 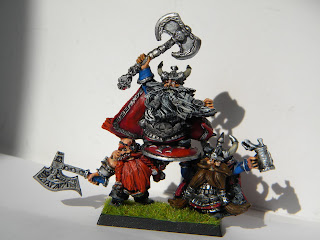 Another white dwarf this time form the 30th anniversary of white dwarf magazine and borne aloft by the two other great iconic dwarves Gotrek Gurnisson and Joseph Bugman, this is one of my favorite models and one of the most expensive models ever made in points terms.... 1000pts to use these 3 together (if your opponent will let you) I've yet to try it, maybe one day. 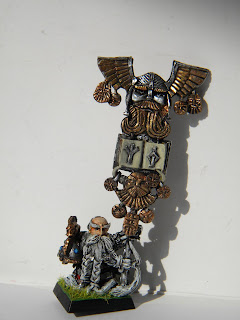 This standard bearer was in from an army set that was the only way to get it from GW, I got mine off ebay in a job lot however. 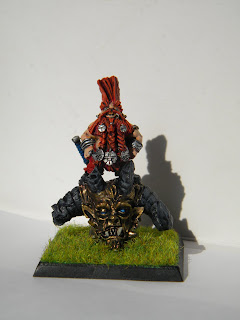 This is the golden deamon slayer, a dwarf slayer on top of the head of the golden deamon with his axe embedded into him, this is a properly cool model, no gaming use (maybe as a slayer unit filler acually) really, but I just love the in reference to GW. 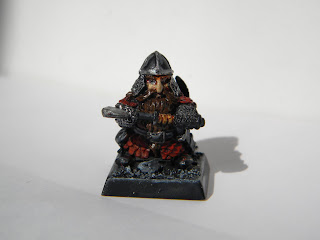 Now this isn't a limited ed. model this is an old(from the late 80's i believe) dwarf model that I use in warhammer quest, he represenst my level 4 dwarf Thangrim.  I really love warhammer quest although I never seem to get past level 6 before drifting off and coming back to it later and starting again.

Tomorrow my favorite dwarf subculture, the slayer cult.
Posted by brownk29 at 12:00:00