Today I'm going to share another recent project, my British Mounted Infantry in the Sudan (early 1880's) to add to my army.  They are 1/72 scale HaT Industrie Zulu war mounted infantry, but painted in grey rather than red.  There are some inaccuracies in the uniform (the lack of puttees and pugarees for example), but as we're still waiting for a basic infantry set I think a mounted infantry set is out of the question at the moment, and I think they still give the right feel. 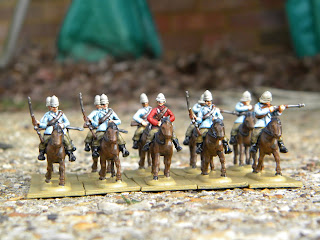 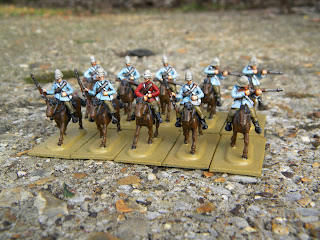 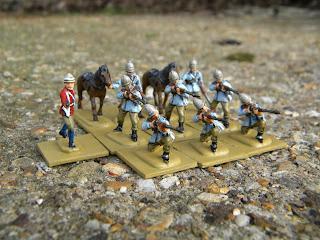 All apart from the officers came from a single box.  The mounted officer is taken from Hat's British Camel Corps and glued to one of the horses intended to be lead by the dismounted soilders and the dismounted officer is taken from waterloo 1815's anglo-egyptian army.  I painted them red just for the sake of it really, apparently some officers did still wear red in the sudan and I like seeing British troops in redjackets.

For information on british uniforms in the sudan I recomend this article by michael perry.

Now if only Hat would release the basic infantry so I could complete my army.
Posted by brownk29 at 16:34:00