I've bought yet more 1:3000 scale WW2 ships from Navwar, this time the USN late war starter set.  Like all the Navwar sets its really good value for money, for a tenner (plus a pound postage) you get 4 battleships, 2 aircraft carriers, 4 cruisers and 8 destroyers.  Theres not many games out there that you can get a playable force for a new faction for that kind of money. 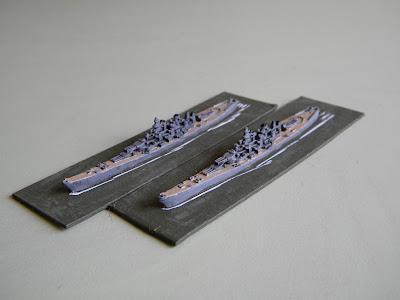 These are the two Iowa class battleships USS Iowa and USS Missouri, the second largest battleships ever built, behind the Japanese Yamato class. 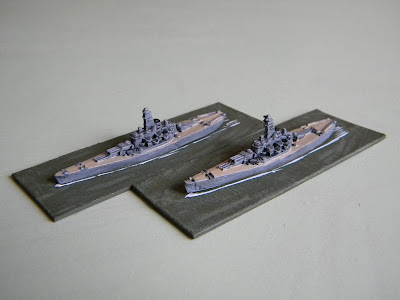 The two carriers included in the set, on the left the very large USS Essex and on the right the much smaller USS Independence. 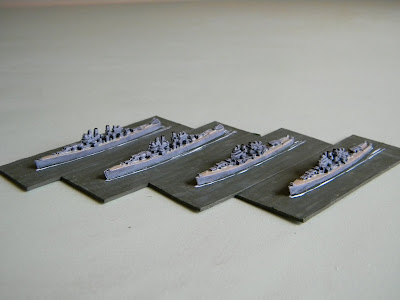 Now for the cruisers on the left we have two Baltimore class heavy cruisers and on the right two Cleveland class light cruisers. 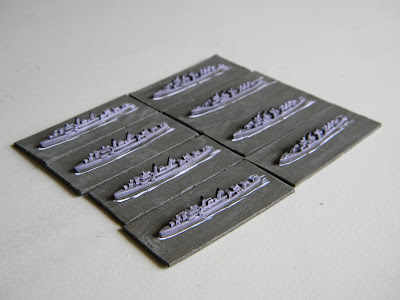 The destroyers thsi time, at the front we have 4 Gearing class destroyers and at the back 4 Fletcher class. 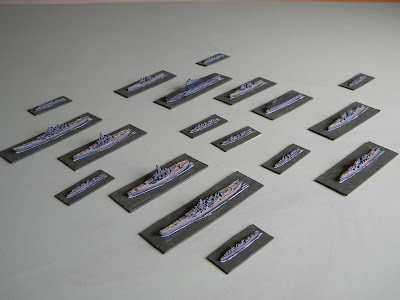 And finally heres the whole set.
One thing that really struck me with this pack compared to the British was that I can see the same design philosophy on the various battleships/cruisers, you can tell they're from the same faction (reminds me of the design links in the spartan games starter packs), whereas the British ships seem a bit of a hodge poge with several design evolutions going on.  It may also be that this is a late war pack so the ships were designed later.
Posted by brownk29 at 20:31:00