Today we have the latest couple of additions to my WW2 Royal Navy fleet in 1:3000 for the Victory at Sea game, but also my first ever houserules that I'm putting up on the web.

I'll start with my new minis. 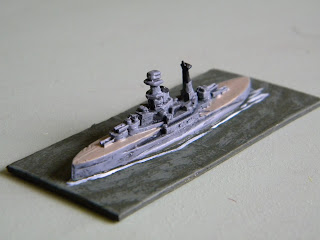 First up the Revenge class battleship HMS Ramillies, they were very much second rate by the time of WW2 and the rules reflect that, but we're trying to conciously use some of the lesser ships in our fleets as you rarely get everything you want in war. 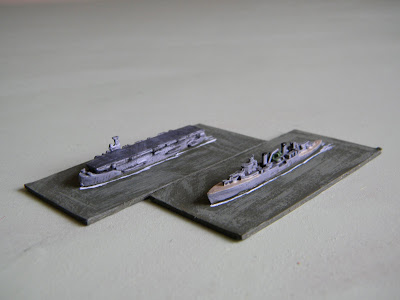 Here we have HMS Smiter, an Ameer class escort carrier, and HMAS Perth, a modified Leander class light cruiser.  The Perth is the first Commonwealth ship to find its way into my fleet. 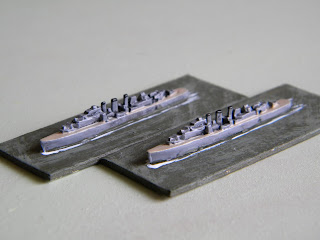 And finally the two Abdiel class minelayers HMS Abdiel and HMS Manxman.
The Abdiel class above and the French Pluton minelayer (that I featured here) don't have rules in victory at sea, so I found some rules for minelaying by David Manley and then worked out what I think that stats should be based on the real life characteristics and what stats they correponded to on other ships.  The link will remain in the sidebar (or click here).  Although its only a small thing this is the first time that I've ever put any rules out on the web, which makes me kind of pleased and nervous at the same time, if anybody does use them please drop me a comment even if you think they suck (I won't learn otherwise). ﻿
Posted by brownk29 at 09:15:00