A Visit to HMS Belfast

As part of my week off not going away but still doing things I spent a day in the big scary capital (I live in a small village and even living in manchester for 7 years I never got the hang of cities), first stop was HMS Belfast on the thames by the Tower of London.  I've been wanting to visit ever since my current naval obsession that started with my trip to Portsmouth Historic Dockyard earlier in the year.  This interest has been expanded with our recent constant playing of victory at sea. 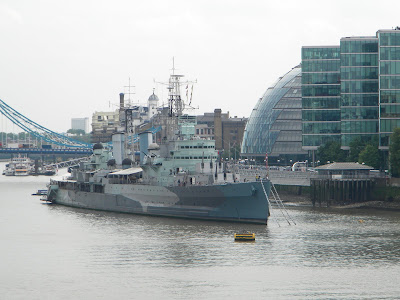 HMS Belfast is a large light cruiser (it kept saying on the info boards that she was the RN's most powerful cruiser of WW2) that saw service in WW2 and the Korean war, its most notable action was probaly the battle of the north cape which saw the sinking of the German battlecruiser Scharnost.  You can wander around the ship at leisure although there is a suggested route.  Its mostly set up to try and show what life aboard was like in WW2 (very cramped by all accounts, 27 men in one of those turrets for example) but there is also a couple of museum galleries aboard.  One the galleries had a bunch of model ships including this one of the monitor HMS Erebus. 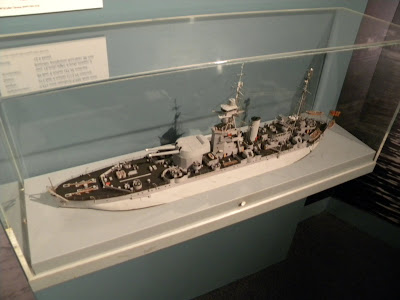 I really like monitors a lot, i think its the ginat out of proportion turret on what is essentially a small ship.
Several parts on the tour had to do with firing and aiming the guns, and with all the complications the main guns could still fire at a rate of 8 shells per minute. 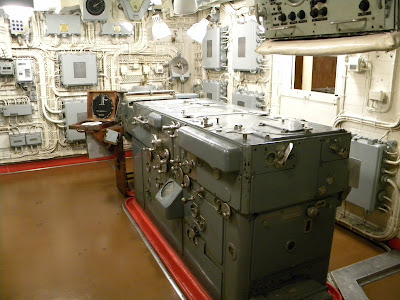 This is a mechanical computer hidden deep in the ship that worked out evevation and direction so as to hit the enemy. 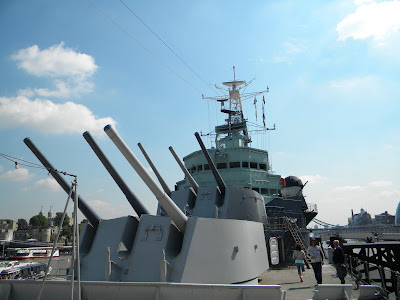 A&B turrets from the deck
At the end of the visit I had the impression of a powerful and technically complicated ship (the engine room was a massive tangle of pipes and gauges which would have been increadily cramped and hot to work in).  I only we had had the foresight to save one of our battleships for the nation, not just this cruiser.

It cost me £13.50 for enterance and I spent a good couple of hours looking round.  The price also includes free use of an audio guide.  I enjoyed it and  was well worth it I reckon.
Posted by brownk29 at 13:50:00