The latest additions to my WW2 British fleet for Victory at Sea today.  As always all models are in 1:3000 scale from Navwar.  My fleet has grown at quite an astounding rate since I started buying these ships back in the late spring, my British fleet alone now has all 20 capital ships in service with the Royal Navy during the war, plus numerous cruisers and destroyers, in fact the total number of vessels in my fleet is now 94 (thats for the Royal Navy only, since the Spring I've also painted 12 convoy ships, 33 Free French and 18 American), which is far more than I could ever use in a single battle, but I don't regret it at all, in fact its been a really refreshing change in both painting and gaming.  The only question is where to go next, I could go for more cruisers or go for the battleships/carriers that where designed but cancelled, a sort of fantasy fleet for a war continuing into 1946 against my friends Japanese, or I could expand my US fleet, or even start another new fleet, I haven't decided yet, but I'm leaning towards expanding the Americans, but only time will tell. 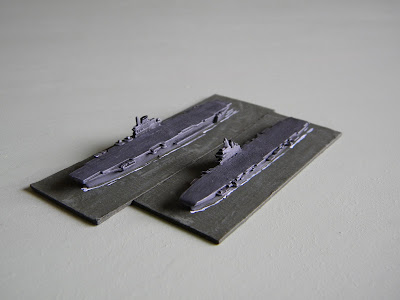 The large fleet carrier HMS Indefatigatable (Implacable class) and the light carrier HMS Colossus (Colossus class), I've always found it really odd that HMS Colossuss isn't that colossal at all and is very much a mid-sized carrier. 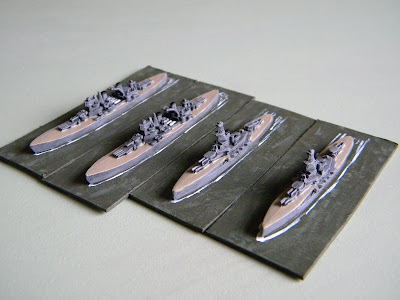 Here we have the last 4 WW2 battleships for my fleet, on the left you have the King George V class ships HMS Anson and HMS Howe, and on the right the old Revenge class battleships HMS Revenge and HMS Resolution, the revenge class were outdated by WW2 and don't match upto other British battleships in the Victory at Sea game, but I still try and use them occasionally.  I recently saw one of the 15" guns off of HMS Resolution on my trip to the Imperial War Museum. 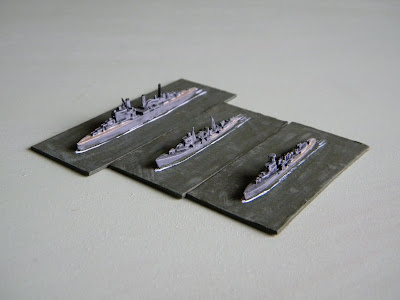 On the left is the county class heavy cruiser HMS London, the moving across we havd the anti-aircraft cruisers HMS Delhi and HMS Curacoa. 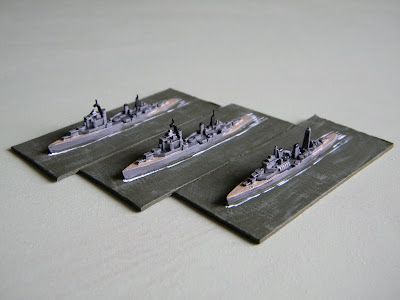 These are all light cruisers, on the left and in the middle are the swiftsure class cruisers HMS Swiftsure and HMS Minotaur, and on the right is the crown colony class (ceylon group) cruiser HMS Uganda. 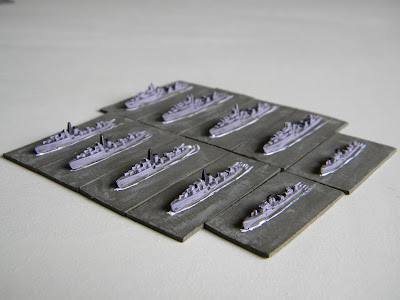 And finally a flotilla of destroyers, the front four are S-Z class, the back four Battle class with two hunt class escort destroyers on the right.
Posted by brownk29 at 17:30:00