If you read my last post ﻿you'll known I've been on holiday recently, one of the things I did on that holiday was take a day trip to Portsmouth historic dockyard.
As you approach the dockyard the first ship you see is HMS Warrior (1860) the worlds second Ironclad ship and the first in the royal navy, she instantly obsoleted every other major warship in the world, but was then herself out of date within a decade.  She's an impressive sight even today, a big and powerful looking ship.﻿ 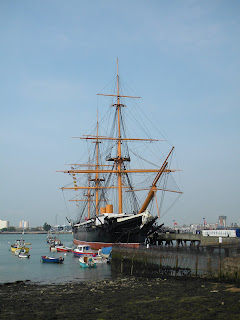 You get to walk around the warrior at leisure and can go pretty much where you like, the most impressive moment for me was walking down into the gun deck and seeing the long row of guns (the pic really doesn't do it justice). 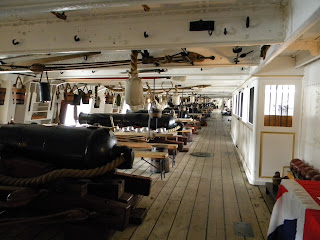 The whole ship has been lovingly restored to its original look and feel.  It's a very weird mix of the old and the new, in some ways it looks like the earlier ships-of-the line (with the big broadsides etc) but then in places has a distinctly modern feel (like with the huge pistons in the engine room).

The other big ship you can go on is the HMS victory, Nelsons flagship at trafalgar and the worlds oldest commissioned warship. 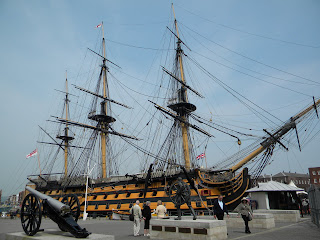 Again you can walk around her, although you have to follow a set path this time, and apparently at busier times you get bustled along by tour guides, luckily though it was quiet enough today and we were allowed to take our time.  The contrast between victory and warrior (almost 100 yrs between launches but 55 yrs between the victory at trafalgar as shown here and the launch of warrior) is fascinating, and you can see the relationship between the two ships.
Also in dry dock at Portsmouth is HMS M33, a WWI monitor warship built in only a couple of months in 1915.  One of only two British warships surviving from WWI, you can't go on it yet, but the info boards by it state that its intended that it will open to the public in time. 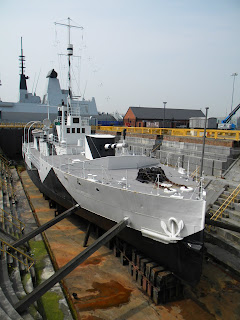 M33 saw its first action at Gallipoli, a campaign that holds particular interest for me as my grandfather fought there, and later saw action in Russia in 1919.  She has also been known as HMS Minerva and Hulk C23.  The dazzle camouflage was really interesting as well, I've never seen an example of it 'live' before.

Also included with your ticket is a trip round Portsmouth harbour and you get to have an external look at whichever of the current Navys' warships are in dock.  For me the highlight were the new daring class destroyers, ultra-modern warships and very different to any ship the Royal Navy has ever fielded before. 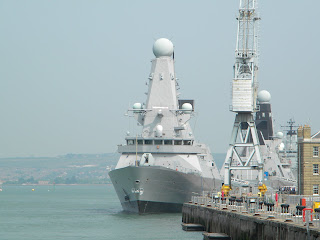 Here you can see HMS Diamond and behind her HMS Daring. 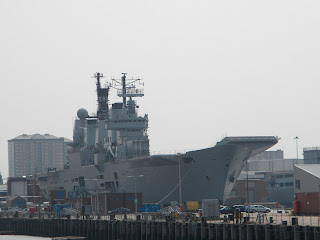 A sadder moment was seeing the old flagship HMS Ark Royal awaiting its fate after it's been decommissioned early as part of the defense cuts.  Also in dock was HMS St. Albans the newest of the 13 type 23 frigates currently serving in the RN, HMS Edinburgh a type 42 (batch 3) destroyer and also a RFA leaf-class tanker.

Also included in the ticket price is entry to the Mary Rose museum (you can't see the hull at the moment as they're building a new museum around it), the national Royal Naval museum, action stations (a mix of simulators and physical challeneges, aimed at kids really but still quite fun) and access to the trafalgar sail (the actual main sail used by the victory in the battle) all of which is very interesting, we turned up as gates opened and only left as it closed.  The ticket price was £20 for an adult which we thought was very good value for a fun and fascinating day.

So now I've told you about my day out, you may be wondering why I'm telling you all this and how it relates to the hobby, well theres 2 reasons:

1.  Firstly there are lots of models of ships all over the place (mostly warships inevitably) from old ships of the line all the way upto the current fleet and in a variety of scales.  Most of the models are found in the Royal Naval museum, but are scattered throughout the entire site.  I'm not sure why but I seem to have forgotten to take any pics of them.

What I did remember to photograph (badly I admit) was these two excellent dioramas. I think they're in 30mm scale.

Below is a diorama of naval Brigade forces in action during the Indian Mutiny of 1857. 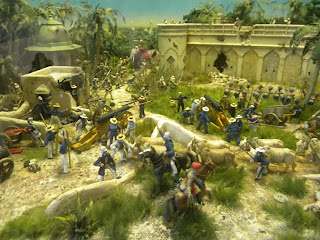 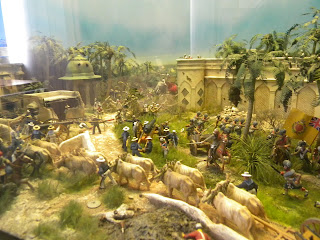 And here we have marines attacking a Mediterranean port during the Napoleonic period. 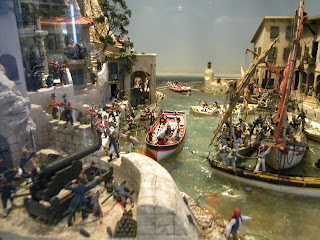 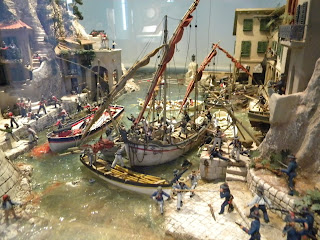 There was also a diorama of the HMS warrior (1781) (a ship of the line not the ironclad shown earlier) being launched but I seem to have forgotten to photograph that too.  All in all plenty for the model enthusiast to look at.
﻿
2.  And secondly I now have a massive urge to play a naval wargame.  I think its gonna have to be 20th century as I don't fancy faffing around with model sails, and I fancy ship on ship action, so I'm worried about wargaming WWII as it might lead to carrier dominance, I'm unsure as yet though, if anyone has any recommendations for rulesets / ship manufacturers I'd be grateful for the info.
Posted by brownk29 at 16:27:00