Victory at Sea - a Review

Yesterday I finally got to play some games with my little ships I've been painting for the last few weeks.  We played using the WW2 naval warfare rules 'Victory at Sea' from mongoose publishing and I thought I'd share my thoughts on this game and the book. 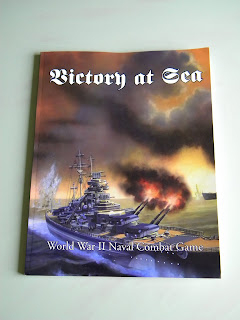 I haven't got the expansion book 'order of battle' (yet) so this review is only based on the content of this book and the 5 basic games I played yesterday.

The Book:
The book is a black and white paperback with 96 pages of rules plus a few pages of counters you need to photocopy.  It's well laid out with plenty of diagrams and pretty pictures of big ships, no issuses here.  Colour would obviosuly have been nicer, as would card tokens, but would that have been worth the extra cost? to me, no, I'm looking at this very much as a rulebook and colour wouldn't really add much (most of the photos are in B&W anyway).  The book is divivded into 7 main sections, the basic rules, advanced rules, scenarios, historical scenarios, campaigns, fleet lists and counters.

Basic Rules:
This section contains the basic rules for moving and shooting, plus rules for special actions (like flank speed, evasive or come about) and a few special traits that ships posess.  Basically smaller ships move faster, are more manvoerable and are harder to hit, but when they are hit they take a lot of damage and sink quickly.  Bigger ships manvoure slowly but can put out a tremendous amount of firepower and soak up a lot more hits.  All ships have a max move and to turn (upto an angle in your stats) you have to move at least half speed first.  Its simple and it works suprisingly well.  The ships have a variety of different weapon systems and the main turrets have different firing arcs depending on posistion.  Most of the tactics seemed to revolve around getting into a posistion where you can unleashed all your turrets against one enemy whilst trying to stop them doing the same to you.

Advanced Rules:
This section introduces rules for aircraft and submarines plus torpedoes, night fighting, radar and bad weather.  The meat of the section is in the aircraft and sub rules and I'm afraid I can't really say alot about them as we haven't used them yet.  In fact the only rules we used were the torpedo rules, which also worked well.

Scenarios:
The book contains 6 generic scenarios (so you can roll a D6 and generate a random mission) based around different types of naval combat in WW2.  These are a couple of general battle scenarios, a couple of convoy scenarios, a carrier battle and an atempt to run a blockade.  These give a nice selection of varied battles and the rules also involve rolling dice for night/weather and wether land based aircraft can be used (as aposed to aircraft launched from carriers) to add even more variety.

Historical Scenarios:
The book also contains 12 historical scdenrios, 6 Britain vs Germany, 3 Britain vs Italy and 3 USA v Japan.
We found the Britian v Germany scenarios great as starter battles as there were only a few ships involoved on each side.  We played through 4 of them in a couple of hours and it allowed us to get the hang of the rules.  It's also always nice to recreate such famous moments such as the battle of the river plate and the sinking of the Bismarck.  The problem with these scenarios is the lack of balance in the fleets and one side is almost always at a distinct advantage, but still we had fun with them.

Campaigns:
The book also contains a complete campaign system including rules for repairing damaged ships, gaining experince and cpaturing strategic points.  It includes sample campaign maps for the meditteranean and the western pacific.  It looks quite interesting, but obviosuly I've not given it a go yet.

Fleet Lists:
The book contains extensive fleet lists for 6 nations, Britain, Germany, USA, Japan, Italy and France.  The amount of ships in each list varies wildly though, the Royal Navy has 19 ship entries whereas the italians only have 6 different ship classes.  Still there is a lot of variety in the lists and most of the major ship types are represented (and most of those that aren't are apparently in the expansion order of battle).  Also is a small section on civillian ships for use in convoy scenarios.  This section is where the games major weakness is though.  Not in the description of the ships or in their stats, but in the points system.  Basically its too broad-stroked and not detailed enough to be balanced.  Each ship is awarded a priority level of patrol, skirmish, raid, battle or war and the size of the game determines how many fleet allocation points it costs to take a ship from each priority level.  What this means is that each entry in a level essentially costs the same number of points, but all the ships at a level are definatly not equal.  It's not a death-knell to the game, you just have to remeber not to take it too seriously, which was quite possibly the designers intention.

Counters:
The counters section has photocopy tokens for turn-keys shotting arcs, torpedos and other tokens and also counters representing all the ships in the list.  Which brings me on to a clever mechanic about scale.  The system is designed for 1/6000-1/2000 sclae  but as all distances are measured from the exact middle of the ship/counter it really doesn't matter and you could easily you ships of different scales against each other, it might not look right but opens up opportunities for playing against other people who might have different scale ships to you.

This is a great introduction to naval wargaming, but it is definatly simplistic compared to a lot of naval wargames out there, there is some bookeeping involved, but its not too much, I feel its very much aimed at people like me coming from fantasy/sci-fi wargaming trying out naval for the first time, and it does this job well.  As I mentioned earlier we've not used the subs or aircraft yet and I'm hoping they add depth to the game without being overpowering, I'll write a (shorter) post on these rules after we've tried them out.

So in conclusion if your after an ultra-realistic or perfectly balanced game this won't be for you, if you want to have fun moving little ships across the table then I highly recomend this.
Posted by brownk29 at 22:27:00