So here we are at the end of this week having a look at part of my dwarf army, and now we're going back to where we started with some more lords and heroes. 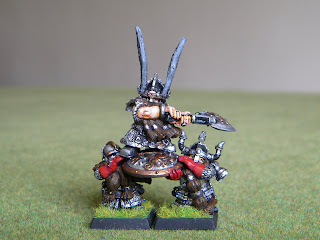 First up King Alrik, or more often for me, lord with sheildbearers, a great model and a great concept, I think the fact it reminds me of asterik, which  I loved as a child helps. 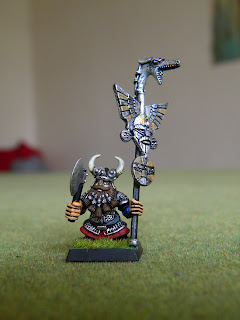 Here is a very simple conversion that I used to use as my army standard before I acquired the metal limited edition one.  Its made entirely out of the 6th ed multipart plastic kit, using the champions head and the musicians trumpet added to the top of the standard. 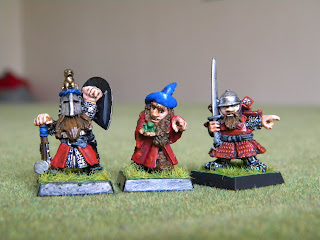 Three very characterful models here, an almost dwarf bretonnian feel to the first figs, then in the middle we have a dwarf wizard with frog familiar (yes dwarves used to have wizards, a loooong time ago, but they were never much good).  Then on the end the dwarven samurai model, I've always been intrigued by this model and wonder at the story a dwarf who has obviosuly traveled to nippon and returned. 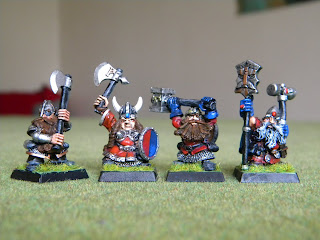 These are the other 4 character models from the Grudge of Drong campaign pack (Krudd Mad Mattock was shwon in the miner post a few days ago).  From left to right we have Skag the Stealthy, dwarf hero, Queen Halgar Longplaits, dwarf queen, Drong the Hard, dwarf king and Grung Grudge-Bringer, master runesmith. 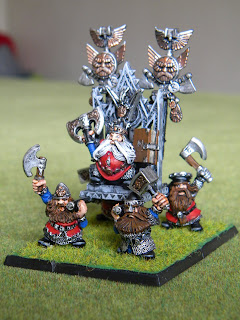 And finally I thought the most appropriate place to end Dwarf week would be with Thorgrim Grudgebearer, the Dwarf High King.  This is the origanal model and I prefer it to the current version.
Thanks to everybody for reading this week and I hope you enjoyed a brief glimpse at some of my dwarf collection﻿, for those that don't like dwarves, my normal random wandering blog will return next week.
Posted by brownk29 at 13:35:00