So more pics of little ships again I'm afraid, my fleet's really coming along nicely now and to be honest I've probably bought to many ships, oh well they weren't expensive and I do like them a lot. 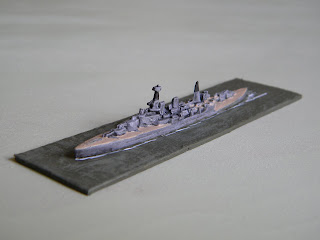 HMS Hood the largest battlecruiser built by the Royal Navy, she was the pride of the fleet and the empire for two decades before being sunk by the Bismarck. 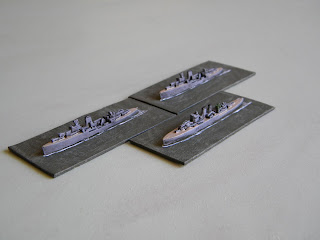 The Leander class light cruisers HMS achilles and HMS ajax and the heavy cruiser HMS Exeter (on the left), the british fleet that fought at the battle of the river plate against the Admiral Graf Spee. 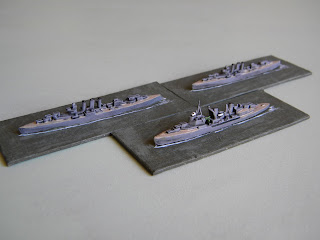 HMS Norfolk and Dorsetshire county class heavy cruisers and HMS Belfast a town class light cruiser (the middle ship).  I'm currently building a 1/600 scale airfix model of the Belfast as well and am planning on visting her in london in the next month or so. 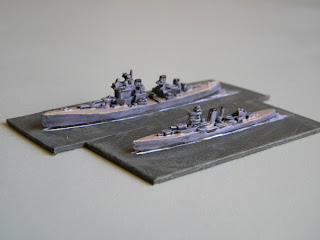 The Battleship HMS Prince of Wales and the heavy cruiser HMS York.

As you many have noticed I've finally decided out how to base them, I've stuck them on thick card (the same as I use for my historical 1/72 scale models) them painted the card the citadel catachan green then drybrushed with humbrol green paint 102 and finally added some white to represent the wake.  I'm pleased with it and its easy and quick, I considered trying to model waves onto the base but to be honest couldn't be bothered.  The other thing I've seen a lot of poeple do is have the names of the ships written on the top of the bases, now I understand why without some form of identification it can be very easy to forget which ship is which (for me with the cruisers especially), but I don't like the look of the name on top of the base so I've written the name, class, year of launch and country on the underside. This way I can still tell them apart but without ruining the look.
Posted by brownk29 at 10:04:00