I've been on holiday camping recently, and even whilst on holiday I need to get my gaming fix, so today I'm going to give a brief review and my thoughts on my 6 travel games and rank them in order of my preference.  The other thing we take is a deck of cards but leaving that aside I have: 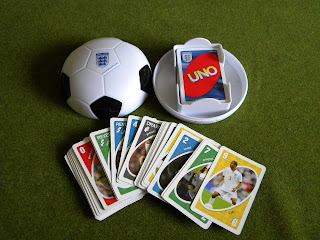 I picked this up for 50p after the world cup last year, it may have footballers on it, but its still basically just uno.  You get a hand of cards that you try and get rid of by mtaching colours or numbers and there are a number of action cards that make players take more cards or change the direction of play.  Theres little strategy and its not great, we don't really play it much. 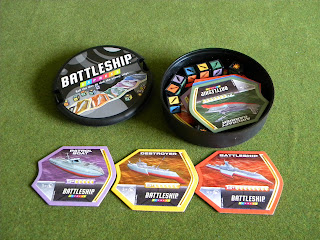 Another cheap game I picked up on a whim, you each have a fleet of 5 warships you take it in turns to try and sink an opponents ship, when you've sunk the required number of ships you win.  This means that the player who goes first has a massive advantage, we had several games where the first player sunk a ship every turn and the other players didn't have a chance of winning.  The game has two varieties, a captians game and an admirals game.  The cpatains game is simpler and we actually prefered it as you can only attack the 2 ships at the front of the fleet, in the admirals game some of the ships can attack ships anywhere.  Its a simple game and it doesn't take long to exhaust it tactically, still it was ok for the price.
here is a link to some other rules made to take advantage of this set that I've just found, not had a chance to try them yet, but they look interesting. 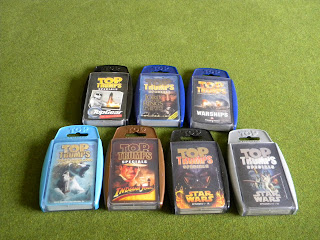 Here we have the longest standing game in my travel collection, the simple, humble, but suprisingly fun game of top trumps.  If anybody reading this doesn't know, each top trumps deck has a character from a film or a ship or a car etc with its vital stats on it in 6 categories, you deal out the deck and a player nominates a category, the player whos card has the highest number wins all the cards and nominates the next category, you keep going till someone wins all the cards.  Thats its.  I'm not entirely sure whys its so fun, but it is.  A lot of the 'skill' is in knowing the deck and introducing a new deck every so often livens things up.  I think using a deck on a subject you have an interest in helps.  We've had a lot of fun with these over the years.  Another advantage is that uniquely among these games no table or flat surface is required, you could actually play this in the car as your travelling rather than at the site once your set up. 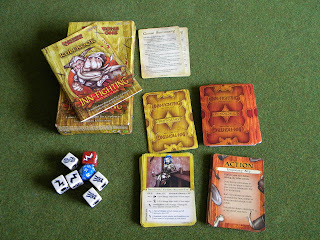 Not a travel game as such, but still small enough that we take it with us.  As well as the game you need some tokens to play, we normally use poker chips, but coins or matches (or even as we used once pieces of dried pasta) would work as well.  Its based on the D&D world and simulates a bar fight.  You take a character at random and start rolling dice and hitting poeple, you get victory points by hitting or knocking out opponents, the first player to 20 victory points and then hurt an opponent wins.  What makes it good though is that there are many ways to take victory points off poeple, the game usually starts off with random bashing but gets tactical as people approach 20VP.  The action deck is quite fun as well, I like the bystanders who make your warrior better, another good thing is that if you warrior gets knocked out you just get another, all players remain in the game till the end and the lead will often switch places.  As a light hearted game its a lot of fun with just about the right amount of decisions to be made. 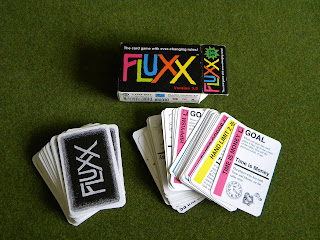 Another card based game, fluxx the game of changing rules.  You draw cards and play them, some of these change the rules, the objective is constantly changing, you can win on turn one or it can take an hour.  This all makes it difficult to desricbe.  Theres only a little long term strategy, this increases as you learn the deck, but anyone can jump in and start playing and have a chance of winning, there is a lot of thoughts about playing cards in the right order at certain points though.  A great game escpically if you have any non-gamers or older children around. 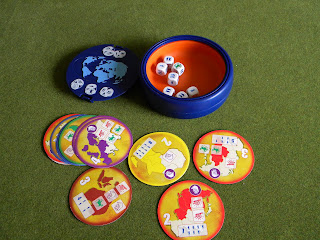 And finally my favorite travel game in my collection.  Designed by the same person that did the weak battleship express, the great Reiner Knizia, this however is very very good.  I suppose the designer had more to work with with risk than he did with battleships.  Like normal risk the world in divivded into territories that make up continents.  Players take it in turn to try and capture territories either from the middle or from each other(its harder to take from another player), when the last territory leaves the middle the game ends.  If you capture all the territories in a continent that continent becomes sealed and other players can no longer attack it.  It all works really well, most games I've played have been tight with one player desperately trying to finish the game whislt everyone else is attacking them trying to take that winning posistion away from them.  What makes this better than a lot of the other games here is the constant interaction between players, the way you are trying to secure your own victory, but often that invloves trying to scupper the victory of another player.  You even get the tempory alliances like those you would get in full risk.  Highly recomended.

On my holiday we visited porchester castle which was used to house prisoners of war during the napoleonic period.  What really piqued my interest was the gaming peices that the prisoners made from bone to keep themselves occupied. 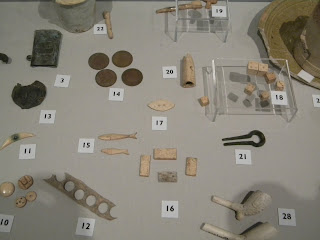 18. is obviously some homemade dice
17. is for cats cradle
16. is some dominos
15. was just labled 'game fish counters' I've been wondering what that game was ever since

If anyone else has any games that take up minimal space to carry and to play that they can recommend please let me know.
Posted by brownk29 at 13:33:00

Email ThisBlogThis!Share to TwitterShare to FacebookShare to Pinterest
Labels: board games, travel games